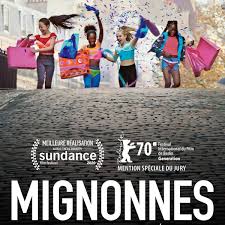 Of all of the films I’ve reviewed, “Cuties” is by far the most challenging. Already a cinematic examination of controversial themes, the early mismarketing by Netflix (whether accidentally or intentionally for controversy sake), brings an outspoken boycott of the film- accusing it of something it is not.

I need to be very clear upfront: due to the subject matter of the film, this review will have some pervasive language and uncomfortable hyperbole. Likewise, I am going to spoil parts of the film’s conclusion to again clarify what this film is actually about and not what the internet falsely claims it is. Cuties” is a well-made, albeit controversial, film that brings to light a range of uncomfortable but necessary issues that require honest and mature discussions.

Let’s start by discussion what “Cuties” is not.

The film is NOT the exploitation of children nor does it seek to or represent any kind of pedophilia sympathizing. It is not the botched Netflix poster that initially sparked the controversy and calls for boycotts.

That poster misrepresents this film by miles, and your decision to watch the film or not should not take this into account at all. The film is not about 11 year old girls solving their problems through the art of twerking. This is not “Step Up” or “You Got Served” where all they have to do is dance, win, and everything is ok. No one is saved through the power of sexualized dance they shouldn’t be doing in the first place. Just because something is depicted does not mean it is advocated for, something I will bring up again later.

The film is very clear about its position on the exploitive nature of pageants and dance contests involving young girls. Their final performance does not bring them closer together to win the day. Rather, it drives them apart, with our protagonist and the audience (both the viewer and the onscreen) realizing what they are doing is wrong. There are deeper revelations here too, many that surround families, traditional religious influences, and rebellious coping mechanisms. While “Cuties” isn’t without its fair share of uncomfortable and controversial themes, it is in no way an exploitive foray into pedophile conspiracy theories.

It must be said that as far as controversial films dealing with young girls, there is a long list that are far more controversial and uncomfortable in nature. Films like “Kids,” “Towelhead,” “American Beauty,” “Lolita,” even “Leon The Professional;” all feature young girls imitating the sexuality of women.

That “Cuties” has the unfortunate mishaps of being released in a cultural climate of naming anything under 18 years of age potential pedophilia is no fault of the merits of the film itself. If these qualifications feel like overkill, it is only because I intend to compliment the film while also discussing some really uncomfortable subjects, and I need to make the distinctions between the internet’s preconceived notions and contextualizing the actual film.

Interestingly, the film is even more complex and layered in what it is than what it isn’t. The film is a lot of things; it’s a commentary on the over sexualization of young girls in pageants, a deep look at broken homes and social class, the consequences of hyper sexualized internet culture, traditional religious influence on children, acceptance, friendships, bullying, social media status, family, and a coming of age story.

The film does a lot, and to tackle all of it would make this more of a thesis than a film review. But that is a testament to the directing and writing abilities of Maïmouna Doucouré. The sheer scope of themes in “Cuties” managed with sensitivity without exploitive provocation demonstrates a true talent behind the camera. Maïmouna Doucouré is extremely conscious and purposeful here, knowing full well many of these things will make viewers uncomfortable without crossing the line into exploitation. For all its provocative nature, this film is incredibly balanced and well executed. Doucouré is very clear: these are our children, and they need the love and guidance of their parents in ways they can’t always express. Yes, even the most rebellious and seemingly independent daughters.

In quick summation, “Cuties” is about a young immigrant girl named Amy (Fathia Youssouf) from Senegal who lives in one of the poorest neighborhoods in Paris. Her mother Miriam (Maïmouna Gueye) is staunchly religious and traditional, and seeks to impart that to her daughter at all costs as she prepares to host a wedding for her husband and his second wife. Naturally, Amy gravitates towards her rebellious neighbor Angelica (Médina El Aidi-Azouni), who leads a dance troupe called The Cuties. Fascinated with a whole new world she doesn’t fully understand, she dives head first into troupe and the internet (thanks to a stolen iPhone) and begins to discover a world outside of her poor, religious home life.

The film turns in some heart wrenching performances from its young actresses, who all approach the world with a bravado of adult and naivety of a child which they absolutely are. These are young girls imitating women, and all of the young actresses (particularly Fathia and Médina) terrifically portray these juxtapositions. This is where two themes collide: young girls living in broken homes largely unsupervised and the effects of over sexualized internet culture. There is a terrific relationship between Amy and Myriam that continually progresses throughout the film. Her mother truly believes her daughter needs more religion to cure her of her rebellious nature. Her daughter (especially after discovering the truth about where and what her father is doing) just wants her mother. This miscommunication leads to Amy crossing many lines with things she doesn’t fully understand to cope. Fathia is brilliant as Amy, and demonstrates a range of emotions that perfectly capture her inner struggles between religion and freedom.

“Cuties” pushes the boundaries of depicting young girls attempting to act like adult women without defending them. There is never a point in the film where you are given the sense that what you are watching is being endorsed by the filmmakers. Nowhere does the film say that it’s ok for 11 year old girls to publicly twerk in a dance competition like they’re in a Cardi B video. Even the audience watching their performance begin to cringe, with one mother covering the eyes of her younger daughter during the show. It is here, in its most unabashed depiction of young girls doing things they shouldn’t be that the film also pulls back the curtain and reveals its true colors.

During their performance, as the audience turns on them, Amy realizes that all she really wants is her mother. She grows up and becomes the young girl she is all in a split second, breaks down into tears and calls out for her mother. These distinctions all throughout the film are what draw the line between examination and exploitation. It is a tight rope, one that will undoubtedly leave you feeling uncomfortable but for the right reasons. The film wants these depictions to be so, and does well to maintain its balanced approached.

There is so much more here that deserves to be unpacked. The revelation that Angelica dresses and acts the way that she does because she hasn’t seen her parents in weeks but is told she is a bad daughter and feels like a failure. The online bullying of their peers and obsession with pushing the limits of online content for likes (which Amy ends up doing in the worst of ways). That same online persona being exacerbated by a boy slapping Amy’s butt as she walks to the front of the class then defending his actions because “she acts like a slut online.” The blink and you’ll miss it scene of Yasmin (the on again off again friend who isn’t quite as thin as the other girls) apparently struggling with bulimia to be accepted by her “friends.” There is so much here it’s amazing it all fits into one film.

Look, “Cuties” is not for everyone. Even for all its balance and depiction without advocacy, the film is meant to spark a plethora of discussion. Where Netflix marketing went wrong is that we are having the wrong discussions. There is so much here that deserve to be brought to light, but we’ve instead decided to boycott it based on what it isn’t rather than tackle what it is. This is a huge disservice to a very well made film.

It absolutely should absolutely make you uncomfortable, but it shouldn’t come at the expense of its heart, which it is filled with. It’s ok to not want to watch it, just make sure it’s for the right reasons.

“Cuties” deserves all of its praise and only a fraction of its criticism, because no matter how it sits with those that watched it, it is an impossible film to forget.