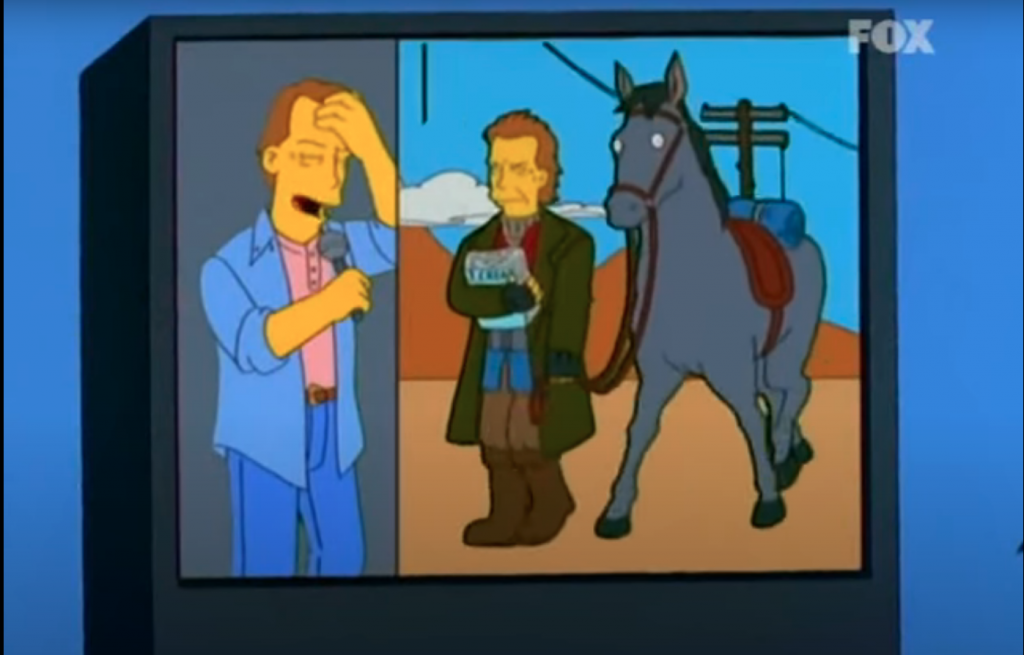 “The Simpsons” Does it Again: Predicts Kevin Costner Defending “The Postman”

You know that thing where longest-running primetime scripted series “The Simpsons” accurately predicts things sometimes DECADES before they happen? Things like fixing a budget deficit left by President Donald Trump in the episode “Bart To The Future,” or global flu pandemic AND murder hornets in the same episode “Marge in Chains,” and our current favorite- Kevin Costner defending “The Postman,” which happened in episode “Monty Can’t Buy Me Love.” Kinda.

Currently ranking at a whopping 8% on Rotten Tomatoes, “The Postman” chronicles the post-apocalyptic heroics of Costner in the title role of a man who takes it upon himself to deliver mail throughout the United States. Also, a pretty great Tom Petty Cameo.

Years after a major global conflict has left the United States in dystopian disarray, a nomadic traveler who becomes known as the Postman (Kevin Costner) wanders through towns in the Northwest, delivering old mail. Thanks to the Postman’s presence, people begin to believe that the U.S. government has been restored. During his travels, the Postman becomes involved with the lovely Abby (Olivia Williams) and clashes with the dictatorial Gen. Bethlehem (Will Patton).

In a recent chat with The Daily Beast, Costner touched on the film, defending his vision.

“You know, listen, a movie is what it is when it comes out, and it has a chance to be revisited. I was always kind of proud of it. I thought I probably made a mistake not starting the movie off saying, ‘Once upon a time…’ Because it’s kind of like a fairy tale: ‘Once upon a time, when things got really rotten, the only thing that could stand the test of time was the Post Office. The only thing that people could count on.’ I didn’t say that and I probably should’ve, because it is like a fairy tale that you’d read to your children at night. That’s how I did the movie.“

Which, while it doesn’t PERFECTLY line up with the scene in “The Simpsons,” is close enough for us.

You can of course stream all of “The Simpsons” on Disney+, and “The Postman” on via Amazon.