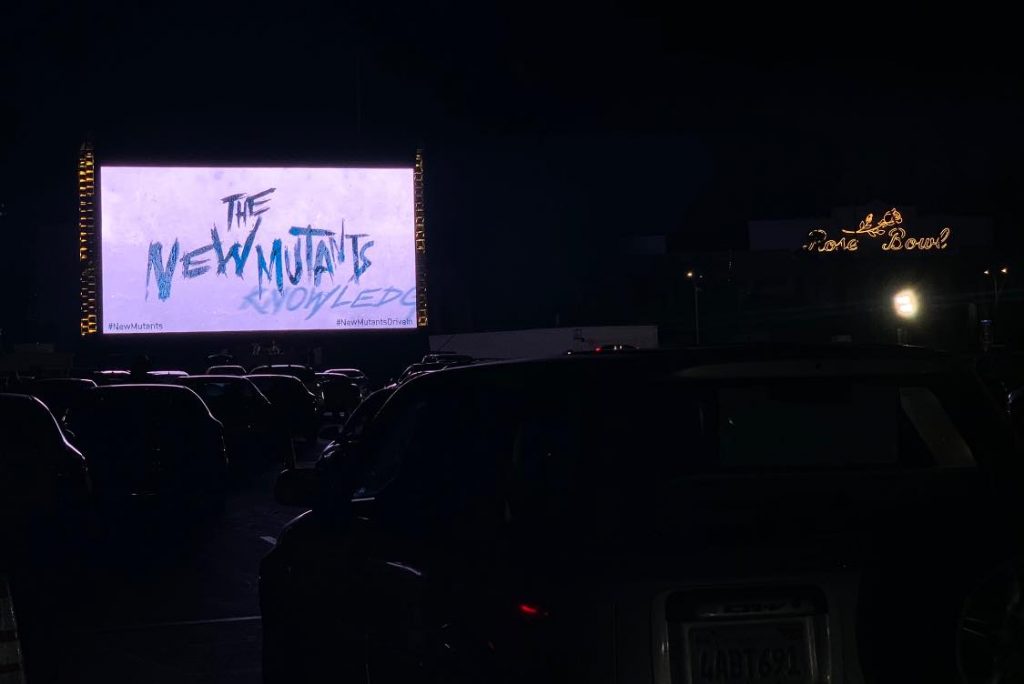 We Saw “The New Mutants” at the Rose Bowl And…[Review]

WE HAVE BEEN WAITING 2 FREAKING YEARS TO SEE JOSH BOONE‘S “THE NEW MUTANTS.” Sorry, sorry- we had to say that out loud. This is one of those films we never believed would ever see the light of day, and after a much-maligned journey, it has finally hit theaters. Kinda. Sorta?

Back before the House of Mouse outright purchased 20th Century Fox, Josh Boone was given the greenlight to make a film focusing on the Demon Bear storyline of the New Mutants. An X-Men comics offshoot, this tale is far more than just a jumpscare for Marvel Comics aficionados [and Bill Sienkiewicz fans, which we TOTALLY are].

With a cast featuring Anya-Taylor Joy, Maisie Williams, Charlie Heaton, Henry Zaga, and Alice Braga the assembled team of young mutants had all the earmarks we needed to wash the taste of the Bryan Singer films away forever.

But then….things stalled out for the film. Two years in development (and release) hell, FINALLY brings the film to theaters (kinda), and we are are pleased to say it didn’t suck.

The screening we were able to see was held in the parking lot at the historic Rose Bowl Stadium in Pasadena, CA. Minus the DJs, the event was extremely enjoyable, and we hope will set the level high for future drive-in screenings. Zaga and Hunt were both there, and spoke to the audience briefly just saying how excited they were that the movie was finally releasing.

The official logline for the film reads:

In this terrifying, action-fueled film based on the MARVEL comic series, five young people who demonstrate special powers are brought to a secret institution to undergo treatments they are told will cure them of the dangers of their powers. Included are Danielle Moonstar aka Mirage (Blu Hunt), who creates illusions from other people’s fears; Rahne Sinclair (Maisie Williams), who transforms into the werewolf Wolfsbane; Sam Guthrie (Charlie Heaton), who, as Cannonball, can fly at jet speeds protected by a force field; Roberto da Costa aka Sunspot (Henry Zaga), who absorbs and channels solar power; and Illyana Rasputin aka Magik (Anya Taylor-Joy). The younger sister of Colossus, Magik becomes encased in armor at will and wields a soulsword that amplifies her multiple superhuman and psychic abilities. Invited by Dr. Cecilia Reyes (Alice Braga) to share their stories about when their powers first manifested, the five “patients” come to understand that they are in a class of people called mutants, who have historically been marginalized and feared. As they relive their origin stories, their memories seem to turn into terrifying realities. Soon, they question what is real and what isn’t, and it becomes clear that the institution isn’t what it seems. Now the question is — why are they being held captive? And who is trying to destroy them? The tension and horror mount in this white-knuckle thrill ride directed by Josh Boone and co-written by Boone and Knate Lee.

Don’t let those headlines from other outlets keep you away- if you know anything about the New Mutants source material, this film will hit some of those key points we’ve been waiting for in an X-Men adaptation.

Magik ALONE is worth waiting for, truly.

The visual effects were really solid, the pacing was good, the only real issue is you do get the feeling this wasn’t the final version Boone was intending audiences to see. There are parts where you can tell the fear, the terror, the ‘horror’ elements have been throttled back to (probably in Disney’s mind) have the result appeal to a wider audience.

While we would not recommend going to an inclosed theater anytime soon, if you have the chance to attend one of the multiple drive-in opportunities to see this and other feature releases in the near term, you should absolutely do it. Let studios know we as audience members are still willing to support strong stories.

A pretty strong score, and that’s 100% because Magik is so damn perfect. Had the film been all about her and Lockheed, I’d be the happiest New Mutant fan ever. That’s not to say the story isn’t ok- but it could, and after making us wait two years, SHOULD have been excellent.

Also- as you’ll see in the film, the presentation of Rahne’s mutation is so lack luster and disappointing as to be laughable. WE KNOW MAISIE PLAYED ARYA STARK, you don’t have to make her character’s wolf-form look like freaking Nymeria, guys.

“The New Mutants” is currently playing in select theaters across the country. No word on VOD or Disney+ yet.

[Also, also- we totally understand co-creator Bob McLeod‘s righteous fury as his freaking name being misspelled. It’s not like they had long enough to fix it.]