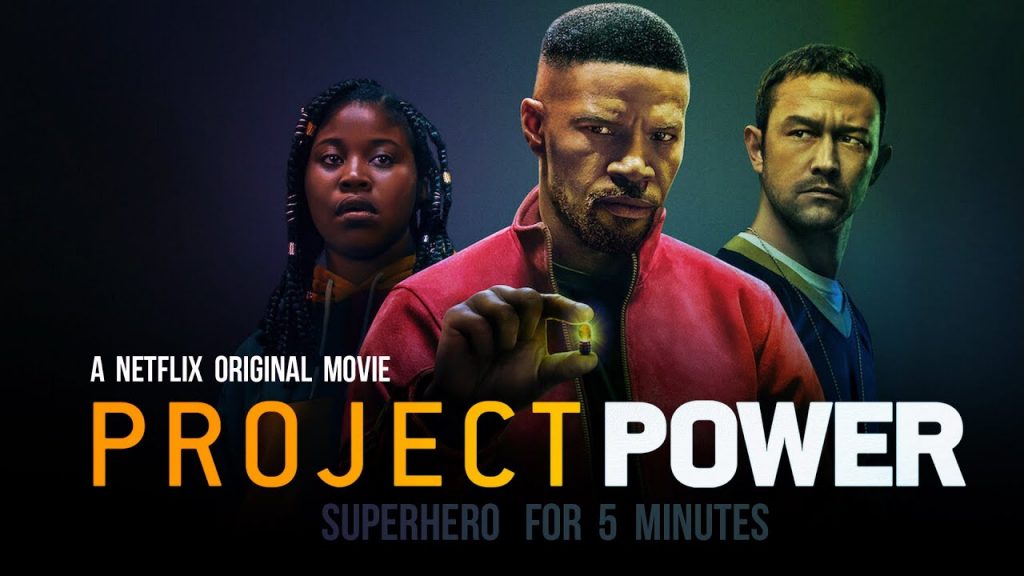 As an avid movie goer without theaters in 2020, I too am desperate for new films. Netflix has done well in keeping a steady stream of original content into our living rooms, and from the first trailer, “Project Power” made my highly anticipated list. Personally, I find the name to be a little silly. But with a stacked cast and a promising premise, I was genuinely excited for it. It must be stated that I very much wanted to enjoy this film. On paper, it had everything I could want in a superpower, sci-fi action thriller. While there is a lot to enjoy, “Project Power” struggles in its execution by trying to do too much all at once. Unfortunately, “Project Power” promised a premise that ultimately doesn’t live up to its potential.

“Project Power” begins with a new drug (a pill) being introduced to the streets of New Orleans. The pill has the potential to grant the user superpowers for 5 minutes at a time. However, there is a catch: you don’t know what power you will get and there is also a chance that instead of powers, you’ll explode. Frank Shaver (Joseph Gordon-Levitt) is cop who has been taking the drug to compete with the influx of superpowered criminals. When he takes the pill he is granted tough skin, making him bulletproof. His dealer, Robin (Domonique Fishback) is a young girl who aspires to be a rap artist and is trying make enough money to help her sick mother. After hoping to meet her cousin who is also a dealer, she is kidnapped by Art Reilly (Jaime Foxx) who is hunting for the source of the drug to find his daughter who he believes has been taken by a shady government organization that may also be behind the drug. Shaver is dispatched to track Reilly down, believing he is behind the drug. Shaver, Robin, and Reilly soon discover they’re all on the same side and must work together to find the real source and get the drugs off the street for good.

Let’s start with what there is to enjoy about “Project Power” first. There are some truly stunning visuals here. It’s backdrop of real-world New Orleans scenery combined with crisp visual effects are perhaps the film’s greatest strength. There’s grit, not just in the depictions of a city still recovering from Hurricane Katrina years later, but also in its action set pieces. This is something Netflix Originals all seem to have in common and execute commonly well. When “Project Power” is firing on all cylinders, it’s a slick, stylish thrill ride that doesn’t let up. Likewise, the cast is equally good here, with all three stars turning in strong performances. Fishback holds her own against the likes of Foxx and Levitt, making the stars of “Project Power” a driving force of the film.

Where “Project Power” starts to fall apart is in its execution. The film never really knows what to do with their superpower premise. It never gives us enough of them because the film wants to do everything. It wants to be a social commentary on the hardships of black communities and social inequality, a funny Marvel film, a cop drama, a gritty down to earth take on superpowers, and a father-daughter rescue film. With so many tropes crammed into one film, it makes the whole of “Project Power” problematic. It shifts from theme to theme without any thread strong enough to connect them. They quickly become familiar too. The film can easily be likened to others that are extremely similar, many of which did it better. “Project Power” feels like a direct rip off of “Black Lightning,” down to a shady government organization experimenting with powers in poor communities to Reilly being part of first experiments in the military and his daughter being born with powers.

There are also some morality issues that can’t be overlooked, either. Though Frank Shaver (Levitt) is a protagonist, his moral ambiguity is extreme even for a “Good cop doing bad things for the right reasons” archetype. For starters, not only is Shaver blatantly taking the very drug he’s trying to eliminate from his streets, he’s also getting them from a young teenage girl. One could argue that his intentions are good so it shouldn’t matter, but “Project Power” wants to say something about social inequality and criminal justice. That’s hard to do when you intentionally muddle those waters with this kind of moral ambiguity.

Robin (Fishback) is also problematic. At one point, Reilly (Foxx) tells her, “you’re young, you’re black, and you’re a woman. The system that is designed to swallow you whole.” His advice is to find what makes you different and do that. This should be an empowering message, but when contextualized, it becomes unintentionally problematic in the worst of ways. What makes Robin different is that she wants to rap. While she’s extremely talented and proves this throughout the film, the inspiring message becomes a dangerous stereotype: To make it out of the hood you have sell drugs, rap, or play basketball. To be clear, neither Reilly nor the directors say this directly and it is clearly not their intention. Nevertheless, it can be easily inferred, and doesn’t help that in the end, drug dealing is what ultimately saves her and her family, not rap.

When we get to the third act, it seems to come from a completely different film. Without warning, “Project Power” goes from a gritty street level commentary to a superhero buddy cop comedy a la “Ant-man and The Wasp.” While the effects are still strong, we are suddenly given a “break into this covert government facility and save the girl” film. Reilly’s daughter and the government organizations come so late in the film it’s hard to understand why the entire climax rests on it. Foxx, Levitt, and Fishback become charming, bantering, humorous protagonists. The shady government organization becomes the faceless antagonist with little to no purpose other than to serve as punching bags for our heroes. Any social or criminal commentary, even the city of New Orleans disappear completely. It’s as if the directors got bored trying to force meaning into their film and opted to punch a few goons with guns and blow stuff up instead.

“Project Power” is not a bad film, but it’s not particularly a good one either. By attempting to be everything, the film ends up becoming nothing. It never elevates itself beyond a few thrills, some slick visuals and strong performances. While these things should all come together well to make serviceable film, “Project Power” struggles to do so cohesively. It wouldn’t be as bad if it had chosen to double down on its superpower premise. But it doesn’t, causing “Project Power” to never reaches its full potential. But hey, at the very least you get learn something new about pistol shrimp.