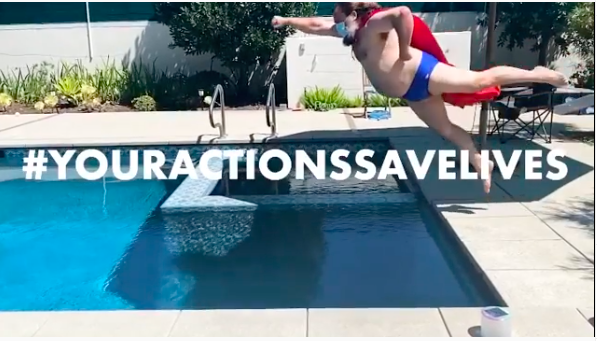 Jack Black Encouraging People to Wear a Mask On Instagram

Since the start of the first quarantine, Hollywood celebrities have been taking to social media to remain in the public eye. From sing a longs to cast reunions, there has been an influx in posts from many of your favorite stars as they remain out of work. Some have even taken to making political statements and displaying their activism. And then there’s Jack Black. Long known for injecting humor into every situation, the “Jumanji” star has recently taken to instagram to encourage people to wear masks. In true Jack Black fashion, it’s hilarious.

Donning his classic “Nacho Libre” red cape and tight blue speedo, Jack Black posted a PSA to wear a mask. It begins with him wearing a mask on his eyes before changing it to his face. Black’s video opens with him stating, “It’s time to be a hero…it’s time to wear a mask. Not this kind…this kind.” It then goes into a hilarious and somewhat haunting slo mo of him prancing in his face mask before randomly superhero diving into his pool. His video is in direct response to a number of people (mainly in the USA) who are adamantly against wearing a mask despite numerous mandates by many states across the county.

While many celebrities have been more serious in their approach, Jack Black stays true to form while also getting his mask message across. For fans, this is exactly the kind of thing you would expect from the Tenacious D singer. Of course, no one asked to see Jack Black’s mostly naked body in a speedo diving into a pool. But if you were trying to get a mask wearing message across and set yourself apart from other posts, Black has set himself apart in the most Jack Black fashion. And that is exactly the kind of this he does best.

If you’re so inclined, you can watch the PSA mask video below.