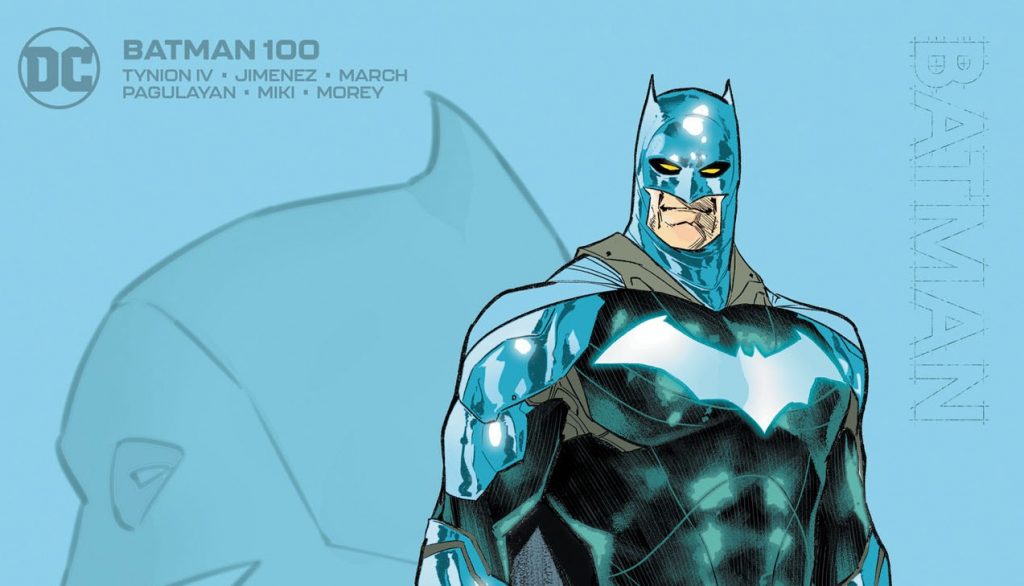 In a variant cover issue of Batman #100, artist Jorge Jimenez displays the brand new Batman suit that the caped crusader is set to wear during the upcoming “Joker War” arc.

The suit is colored with varying hues of blues and black, playing on a variation of the tech powered Batwing suit. While its unknown if this is the new suit, or a one off outfit for the story arch, the fact that its given its own variant cover, speaks to its importance or its likability.

The solicitation for this October releases states the following:

In Batman #100, “The Joker War” comes to a city-shattering conclusion as Batman battles The Joker in a brutal, no-holds-barred final duel! This is a fight 80 years in the making, and its outcome won’t just change Batman’s life — it will change Gotham City for years to come!

Plus, catch the first glimpse of the new villain known as Ghost-Maker! And after the senses-shattering conclusion of “The Joker War” come a pair of short stories that will chart what’s to come in Gotham City and Batman.

The issue itself with be 56 pages and priced at $6.99, written by James Tynion IV with main story art by Jorge Jimenez. Aside from the conclusion of the Joke War story arch, there will be two backup stories : the first fight between Batman and Clownhunter, as well as a new character who has come to Gotham as part of the story arc.

The suit was previously shown in DC Nation preview in early July, where the costume will be shown in part two of of the next Batman event, “Joker War.”

While issue 100 is going to have several different covers, the current issues are being released with character profile variants.

What do you think of this costume change? Are you hoping it’s a one off or are you wishing it could stay? Let us know if you’re planning on picking up the issue and if you like the costume!