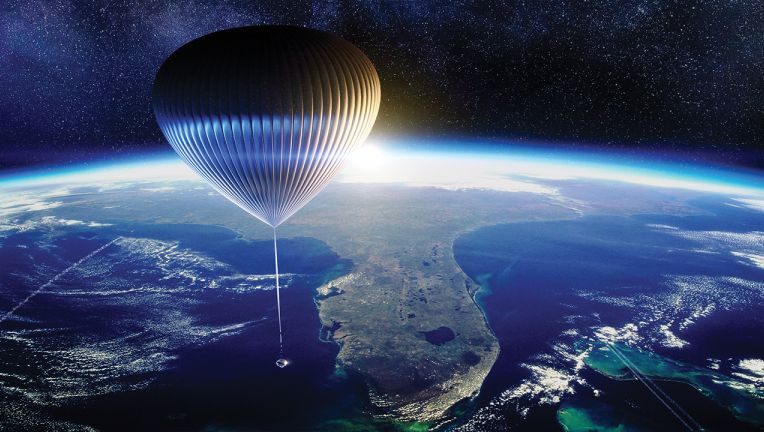 Balloon Rides to the Edge of Space Coming from Florida Company?

If you ever wanted to kind of go to space this might be your best bet. A Floridian company called Space Perspective is aiming to start offering balloon rides to the edge of space. Talk about a nightmare for anyone who suffers from fear of heights. But also a dream come true for anyone who wanted to get an amazing perspective on just how small we are in the big picture.

They are aiming to start lift offs in Kodiak, Alaska at the Pacific Spaceport Complex. The “Spaceship” is called the Neptune and it’s a huge balloon that takes it’s passengers to the edge of space. Since the balloon wouldn’t have much inertia so that it would blast through the atmosphere (like a rocket ship) it would stop at a certain point and they would gradually decrease height and take it back down.

Flown by a pilot, Neptune takes up to eight passengers called “Explorers” on a six-hour journey to the edge of space and safely back, where only 20 people have been before. It will carry people and research payloads on a two-hour gentle ascent above 99% of the Earth’s atmosphere to 100,000 feet, where it cruises above the Earth for up to two hours allowing passengers to share their experience via social media and with their fellow Explorers.

Neptune then makes a two-hour descent under the balloon and splashes down, where a ship retrieves the passengers, the capsule, and the balloon. Neptune’s commercial human spaceflight launches are regulated by the FAA Office of Commercial Spaceflight.

Each passenger is estimated to pay $125,000 for a six hour journey. Which is much cheaper than the estimated $75 million it would cost you for a SpaceX flight when those start becoming available.

Mark Lester, CEO of Alaska Aerospace Corp. says that the new space flights will help bring tourism to Alaska. People will come to see the Northern Lights from the edge of space.

Alaska Aerospace and Space Perspective will test and refine spaceport operations and secure spaceflight licenses from the Federal Aviation Administration. Space Perspective plans to complete an unmanned test flight from the Shuttle Landing Facility at NASA’s Kennedy Space Center in Florida next year. So we should expect to see these flights happening in the next 2-3 years commercially.

Would you ever want to fly to the edge of space? Tell us in the comments!