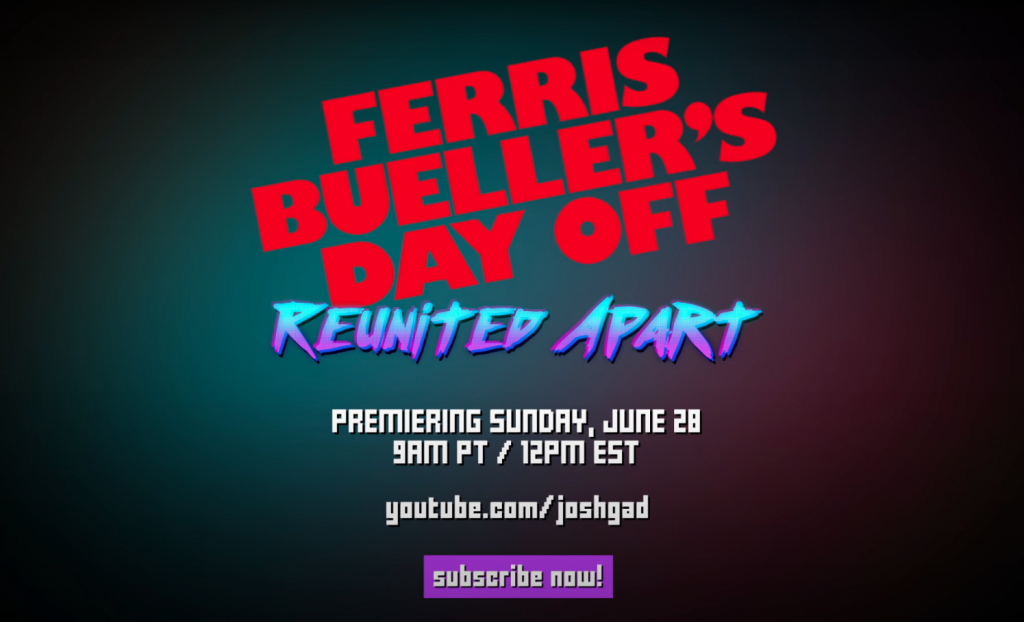 Let’s start by acknowledging how SAD WE ARE to see that next week’s episode of Josh Gad‘s “Reunited Apart” youtube series will be the last. That’s HEARTBREAKING!! We’ve loved every single part of Josh’s show.

We do know that the final episode will reunite the stars of the seminal John Hughes 1986 film, “Ferris Bueller’s Day Off.”

If you’ve forgotten, the film centers around Ferris Bueller (Matthew Broderick), and his uncanny skill skirting the rules and getting away with it with pathologically charming self. Intending to make one last duck-out before graduation, Ferris calls in sick, “borrows” a Ferrari, and embarks on a one-day journey through the streets of Chicago with his best friends Cameron (Alan Ruck) and girlfriend Sloan (Mia Sara). On Ferris’ trail is high school principal Rooney (Jeffrey Jones), determined to catch him in the act. Jennifer Grey stars as Ferris’s sister, and the film is chalked-full of cameos. Hilarity and musical scenes ensue, and the birth of so many iconic callbacks and lines became part of the vernacular.

Anyhow, we can’t wait to see who all Josh Gad gets for this final edition of “Reunited Apart,” which will hit youtube on Sunday June 28th 2020 at 9am pst.