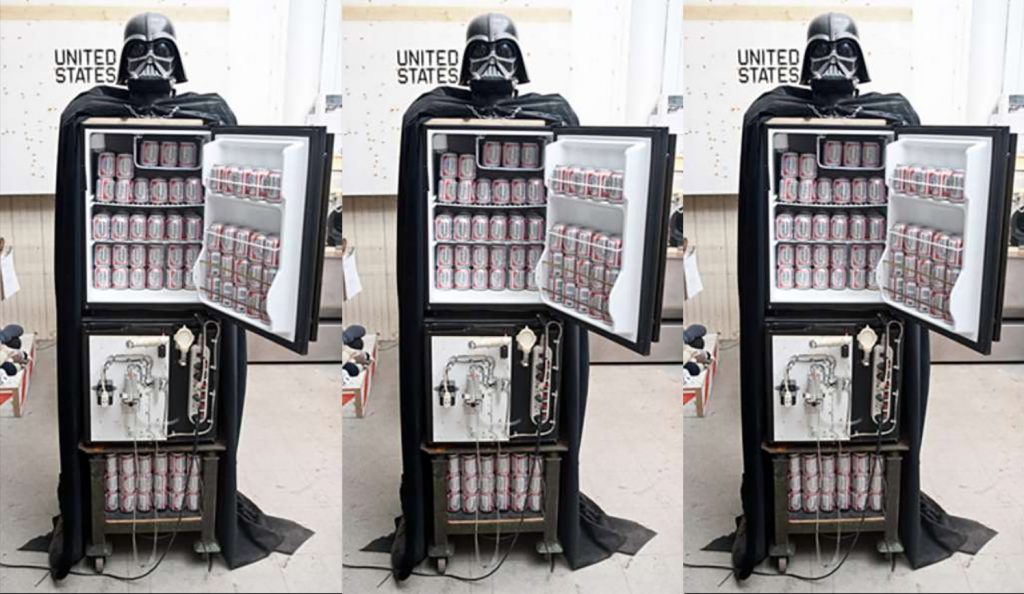 This Darth Vader Refrigerator is a Beer Cooler and Vodka Fountain!

You want somewhere to chill your beer and get your vodka? You should check out this refrigerator design made by Tom Sachs. He’s created the perfect display fridge for in your bonus room when you have company over to marathon Star Wars or even just for a game of pool. Because if you have a bonus room the dream is to have a pool table. Or at least that’s my dream, at least a billiards table.. Anyway we stumbled upon this creation and just had to share!

The top of the fridge is just that, a mini fridge for beer. The middle is the coveted vodka dispenser and the bottom is just for storage. Draped together with a cape and of course his helmet on top, Vader is here to party!

Tom Sachs is most well known for taking popular culture and putting his own spin on it. This is just one creation that he’s come up with and according to Odditymall, sold for over 10K. It’s a neat piece of art but I don’t know if I would want to spend that much or just get the pieces to make my own. Which wouldn’t be too hard if you were mechanically inclined.

One thing that I would probably find a way to include would be sound. You know the breathing noise that Vader makes whenever he’s onscreen? Yeah I would totally include that for every time the door opened. Kind of like the pig noise that my mom used to have on her fridge to remind her not to eat so much. But you know, this is a much cooler nerdier version of that.

What do you think of this thing? Would you want one in your home? Tell us in the comments!