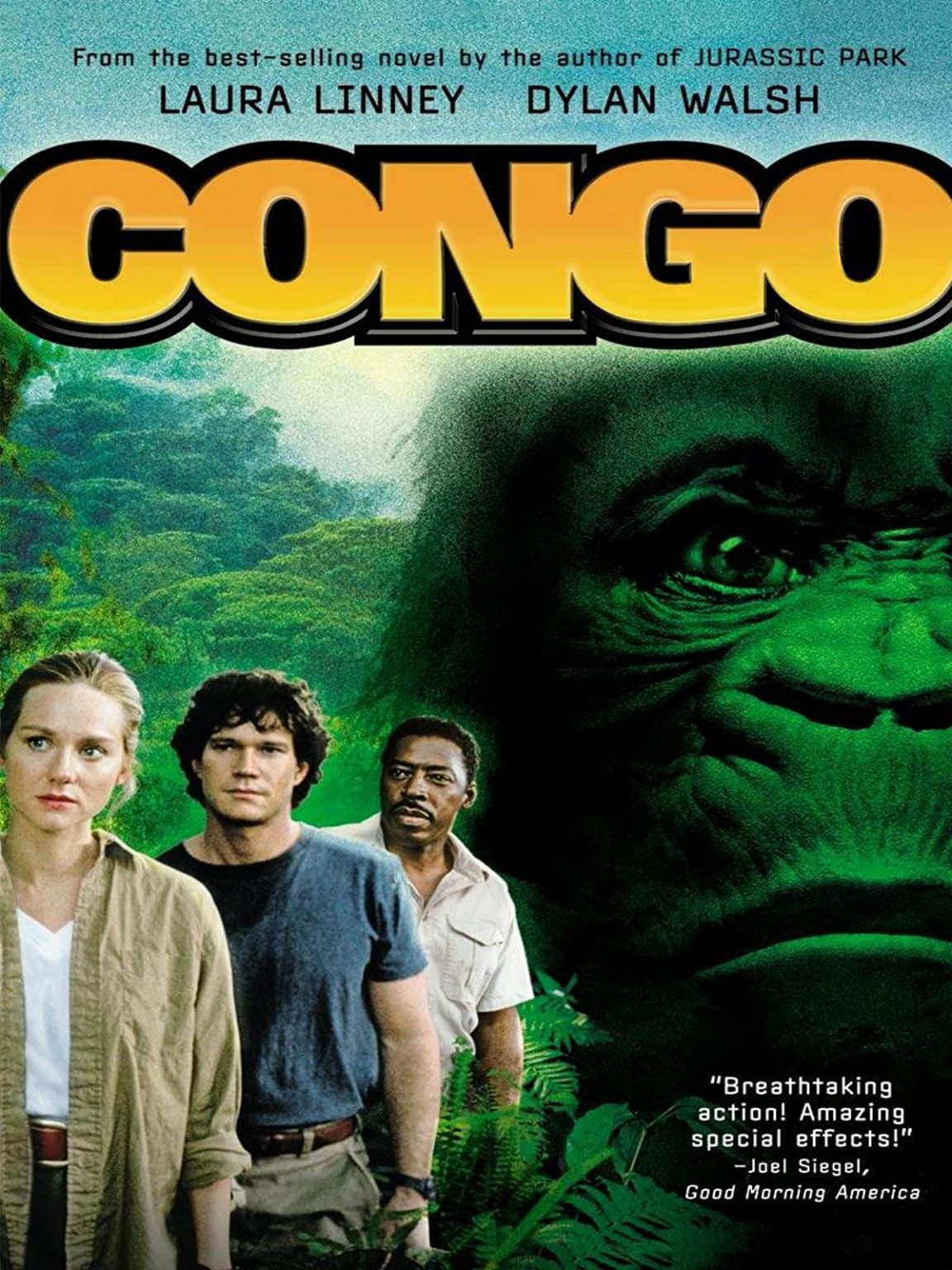 There are a number of films that put a hard time stamp on themselves, and “Congo” is one that is very telling of its time but not for the right reasons. I can remember enjoying this movie a lot as a kid, especially coming off the previous Michael Crichton adaption “Jurassic Park.” Unfortunately for “Congo,” whatever brilliance Steven Spielberg was able to pull from the pages with dinosaurs is completely missing here. But even with the magic missing, “Congo” is so bad its good. It falls just shy of being great by taking itself a little too seriously and not going full parody.

Based on the book by Michael Crichton, “Congo” follows TraviCom electronics expert Karen Ross (Laura Linney) who must travel to the Congo to locate possible survivors of their mysteriously missing crew. She may also be sent by her boss to recover flawless diamonds that can be used for communications, or more likely weapons. Hitching a ride with Primatologist Peter Elliot (Dylan Walsh) and his sign language speaking gorilla Amy and a couple of rag tag guides and criminals, they are dropped into a country in chaos and a jungle full of horrors they never imagined.

If this was the only plot of the film, it would probably make more sense and be easier to follow. Sadly, that isn’t the case here. It seems the film didn’t learn from previous adaptions to have a focused story, rather opting to throw every possible subplot and character from the 348 page book into 103 minute film. The problem then becomes that the film requires the audience to accept some of the most bizarre premises without an justification to do so. It downright comical the way things move along in this film, and the loose attempts to thread all of the characters together is mind numbing if you give it any more than a quick thought. Truthfully, there is almost no reason that any of these characters should ever meet, let alone trek through the African jungle together.

There are a lot of characters in “Congo” many of whom are played by actors that make you go “Oh wow, they’re in this movie too?” more than once. In addition to the aforementioned Laura Linney and Dylan Walsh, the film also adds Ernie Hudson, Tim Curry, and Joe Pantoliano. Even Bruce Campbell makes a cameo in this film. You would think a film packed with this many recognizable names would be a surefire hit, but “Congo” serves as a reminder that great actors can’t always make a bad film better. The film earned 7 Razzie nominations that year, including worst new star Amy the talking Gorilla and worst supporting actor Tim Curry. Although to be fair, Curry seems to be the only one aware of the film that is actually being made, trading seriousness for over the top caricature.

On top of a convoluted plot and unbelievable characters, “Congo” is one of those rare films where practical effects goes wrong. Every gorilla is clearly a person in a suit, and it is comically bad on screen. Not just for the times, either. There are moments where you can clearly see the zippers on some of them, making it hard to believe any interactions with them. Even their jungle is clearly a sound stage, trading in film locations for calculated images of what someone thinks the African jungle looks like. It becomes more noticeable the longer the film goes on, making it difficult for the viewer to know whether they should buy it or just laugh out loud.

Despite all of this, “Congo” is still fun to watch. There is a lot wrong with this film, but it is also very funny both intentionally and unintentionally. Part of me wishes the film abandoned any attempts to be taken seriously and go all in on the camp. It has its moments where it seems to embrace it, but not enough to hold up under the slightest scrutiny. It’s hard to imagine that anyone thought that a talking gorilla, an ancient lost city, super powered diamonds, and of course killer crazy white apes should be taken seriously. Unfortunately, someone did and the film ends up becoming a hard sell rather than a silly adventure comedy.

With all of its flaws, “Congo” comes down to how you choose to view the film. If you can’t forgive its outrageous premise and terrible gorilla costumes, no one would blame you for not enjoying the film. Even a fan can admit it’s bad. Likewise, if you’re willing to remove anything pawned off as realism and accept that it is an inadvertent parody of itself, the film is actually more enjoyable than it should be. I prefer the latter, and even after 25 years I’m not willing to put “Congo” on the endangered species list.