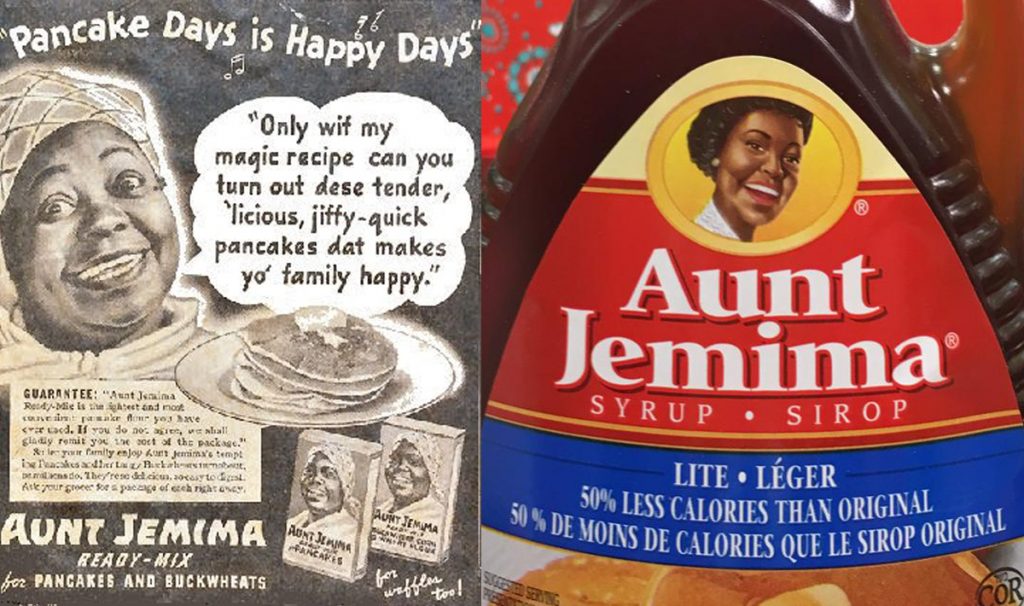 Quaker Oats Getting Rid of Aunt Jemima Over Racist Origins

In a move that seems like a long time coming Quaker Oats has decided it’s finally time to take Aunt Jemima off the shelves. They will be renaming the syrup, and removing the character due to her origins. The character has been with us for 130 years, but she does come from a racial stereotype. Due to that fact Quaker Oats is seeing a lot of upset over their decision.

The Aunt Jemima brand was based of a minstrel song by African American comedian, songwriter and minstrel show performer Billy Kersands. Often times it would be performed by a white man in blackface. And some of the lyrics were:

Apparently it was supposed to be about dissatisfaction with the dullness of worship services in white churches. You can read some of the other lyrics by clicking here.

You may look at Aunt Jemima and see a friendly face who just likes to put syrup on your pancakes. But the story is much deeper than that. Aunt Jemima was created as a way to sell flour to the masses by two white mill owners. Chris Rutt and Charles Underwood of the Pearl Milling Co. developed Aunt Jemima, the first ready mix, in 1889 and sold the Aunt Jemima Manufacturing Co. to R.T. Davis the next year. Instead of using a white person they decided that a black person would sell more. Take a look at this ad…

First of all it’s really cringy to see the words “I’se in town honey!” because it was written how White people felt she would speak in inproper English. The reason that the Davis Milling Company created her to sell their flour was because they saw Black people as subservient and conveniently good cooks. It was their job to serve them wasn’t it? And why not use a Black woman as a mascot for something you would want to serve up to the masses.

Jemima was based off a real person named Nancy Green, a slave who lived in the south. Since there were no birth certificates for slaves, Green was the last name given to her by the plantation that she was on. She lived in a wooden shack that was behind the main house that still stands today. Nancy Green was the first likeness of Aunt Jemima and was discovered at the “Chicago’s World Fair” in 1883.

Green “emerged the image of a wise old cook from the Deep South of Civil War times, who had brought her secret pancake recipe to a benighted northland,” according to Black Hunger: Food and the Politics of U.S. Identity, by University of Iowa English professor Doris Witt.

Then came Herrington in 1935 when she was found flipping pancakes at the New York State Fair.

They’ve also used the likenesses of Lillian Richard, Anna Robinson, Anna Short, and Ethel Harper. But what it all comes down to really is that this depiction of a Black woman has far too long set up with the stereotype of racial inequality.

It could be due to a Black Singer named Kirby on Tik Tok that posted a now viral video on the platform titled “How To Make a Non Racist Breakfast”. In the video she goes over the brief history of the iconography of Aunt Jemima and pours it out in the sink. “Black lives matter, people… even over breakfast.” Which is a sentiment that Quaker Oats whole heartedly agreed with.

What about honoring these folks as figures of the past?

Here’s the argument that always gets thrown around when something like this happens. Wouldn’t you want to know the history of the product and honor those of the past? And the answer is of course you want to honor them! But they would probably be even more honored by being thought of as an equal than a figure on a box or bottle of syrup. Why not read about them if you are truly interested instead of honoring their drawn image on a product.

Quaker Oats changing the image now is in no way erasing the past. But they are instead doing this as a way to look to the future. So despite the backlash that they are receiving the decision stands firm. And they’ve yet to announce the new mascot if they even have one. But personally I would say a tree would be best. Since you know, Maple trees are where they get the syrup anyway.

There’s really a lot to unpack with this, and I know that a lot of people will have their own opinions on what’s right and what’s wrong. But this is a move in the right direction. And it should be our responsibility anyway to educate ourselves and our children on the history of Black People instead of relying on corporations to hold racial stereotypes for the sake of discussion.

You can learn more about Aunt Jemima’s history here.

Another really great article with even more history in it is this piece by Today.