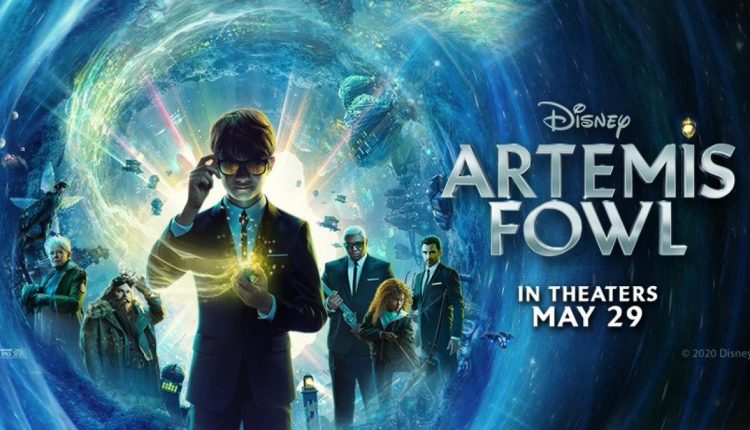 Young adult novels have a specific formula that is rarely deviated from. A young child with parental issues discovers they’re special and must save the world or worlds by finding a doohicky that’s been hidden long ago by their (you guessed it) distant parent. It’s a run of the mill formula that more often than not provides serviceable film adaptions for their target audience. With such a simple plot line already laid out in the source material, it seems pretty difficult mess up. However, “Artemis Fowl” fails in just about every way with the exception of its visuals. Muddled and utterly nonsensical, Artemis Fowl isn’t as bad as everyone says it is; it’s worse.

Based on the books by Eoin Colfer, the film adaption is directed by Kenneth Branagh. It centers around prodigy Artemis Fowl, who upon the mysterious disappearance of his father, discovers a hidden world of magical creatures in search of a powerful artifact called the Aculos. A hooded villain named Opal has captured Artemis’ father in hopes to capture the Aculos, and Artemis must use his smarts to stay one step ahead and save his father’s life. Parental issues, hidden worlds, doohicky.

With all of the basic formula plot points included, it is surprising that the film misses the mark by so far. It has a hard time with coherent world building, throwing every possible subplot and character it can at the wall in hopes that it all sticks. The film is so packed with characters that at one point, I completely forgot that one of them was even in the film and she’s apparently important. Even Artemis Fowl as a protagonist gets lost in the shuffle. Motivations and alliances change so quick you’re left scratching your head as to who or what we should be rooting for. Likewise, the antagonist Opal is so shrouded (figuratively and literally) that we’re never quite clear as to what their motivations actually are. We’re left with no real conflict, just loud noises and magical visuals to create the illusion of a race against time.

A good actor can often times elevate a bad story, so even if the film itself is bad at least we had fun watching our leads. That’s definitely not the case here. Newcomer Ferdia Shaw as Artemis Fowl is dead behind the eyes at all times, meandering through the film with the emotional range of a still painting. Even Hollywood darling Josh Gad is stripped of his charm and directed to narrate the convoluted story in a Christian Bale-esque Batman growl. I’m not sure if Dame Judi Dench suddenly got grandkids, but why she continues to take on roles like this and Cats that are clearly beneath her is a mystery. Like Gad, she too delivers all of her dialogue like she’s in desperate need of a cough drop.

The only strength of the film is its visuals. While the world building is a mess, the actual world that is built is beautifully crafted. The action set pieces were clearly made with care and detail, even if the adapted screenplay was not. The film as a whole seems to rely on these visuals to sell the story, but not even shiny fairy wings can distract the viewer from the muddle context they exist in. Even with great visual effects, the whole of the film looks and feels heavily produced in the worst of ways.

To be fair, I am unfamiliar with the source material. I understand that books and films are two different mediums, and adapting either will always require changes. “Artemis Fowl” fails to capture whatever magic the source material may have, leaving viewers with a film that is more confusing and frustrating than enjoyable. It is a slog to get through, and will ultimately disappoint fans and most certainly will not gain new ones. Here’s hoping the sequel stays in development indefinitely. The last thing Disney+ needs is more “Artemis Fowl“.

“Artemis Fowl” is rated PG and available via the Disney+ streaming service.

Keanu Reeves is Auctioning a Date with Himself for Charity