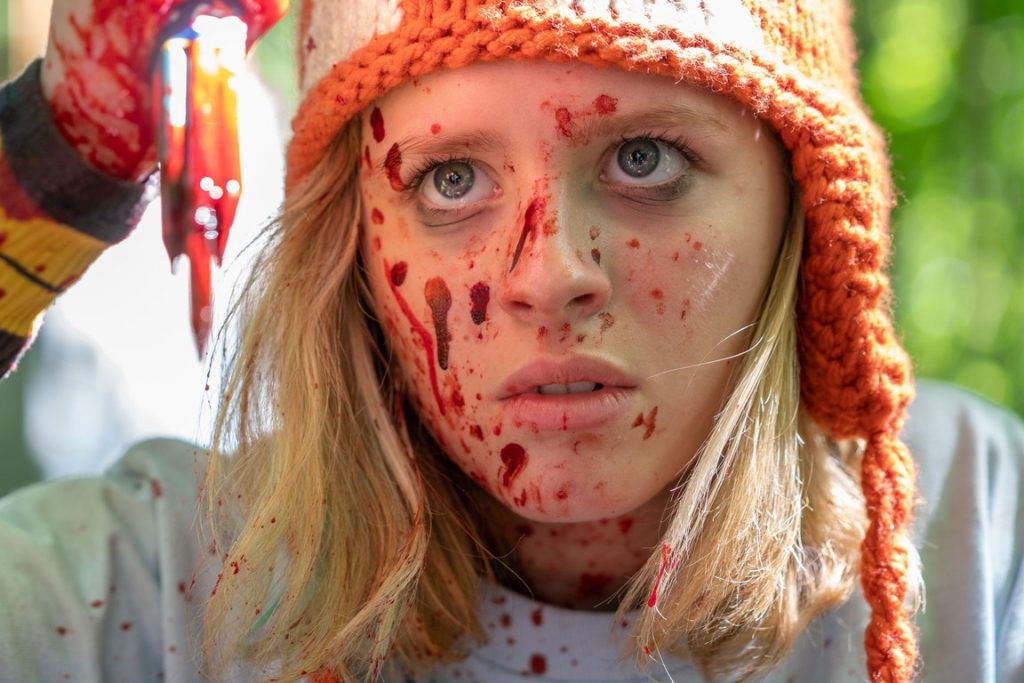 “Becky” is likely to be a film that Quentin Tarantino would have a blast of a time watching (other than it’s lacking any gratuitous shots of women’s feet). It’s a gruesome little home invasion tale with a lot of in your face violence (in many cases, quite literally). The best comparison would be a bloody mix of “Breaking In” and “Home Alone.”

Becky (played by “Ouija: Origin of Evil’s” Lulu Wilson), and her widower father, Jeff (played by Joel McHale) have gone on vacation to a lake house where Jeff has also invited his new girlfriend, Kayla (played by “Room’s” Amanda Brugel) and her young son Ty (Isaiah Rockcliffe) to give them a chance to get used to each other.

Unbeknownst to them, hardened criminals have escaped from prison and are descending on the same house in search of something hidden within.

In most cases you would expect that it’s either one of the adults to slip away and start fighting back against the bad guys. Or it might be one of the kids, but then set elaborate traps or work with the adults to run up the body count. However this time around it’s none other than the titular Becky herself. She clearly has some deep seated anger issues already with the loss of her mother to cancer, and she decides to work on some catharsis by unleashing some pint-sized hell (and very hands-on).

The leader of the criminals is played by none other than Kevin James (that’s right, “Paul Blart: Mall Cop“) in a role unlike any that we’ve seen him in before and he does great with it. It’s not quite as much of a superlative role like John Goodman in “10 Cloverfield Lane“, but it should open a number of additional dramatic roles for the veteran actor.

Overall, the film is fine, and an entertaining enough diversion, but what really makes it memorable and worth commending it for is Wilson’s performance and the way in which she uses various teenager’s room objects to inflict no end of carnage. For fans of HBO’s “Barry,” you will be able to entirely see Becky and Lily (the feral girl who beat the crap out of Barry, played by Jessie Giacomazzi) being able to take down just about anyone they might come up against.

“Becky” is rated R and can be seen at any of the following drive-ins:

For those not near a drive-in, you can also catch it online as it is available for rent or purchase from Amazon Video (you can click the image below to be taken to the film’s info page on amazon).