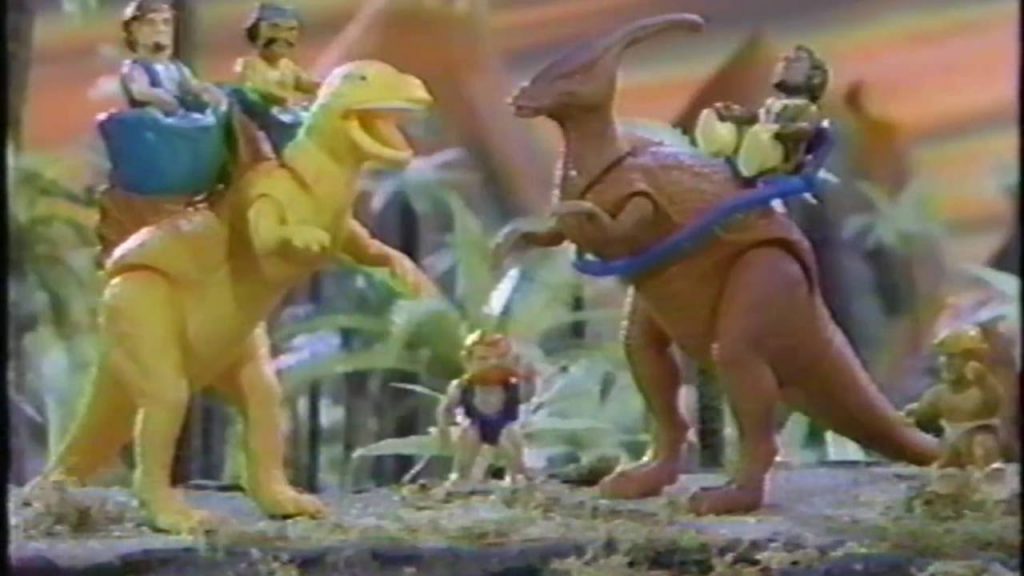 For everyone fondly remembered toy line like the Masters of the Universe or the Teenage Mutant Ninja Turtles, at least a dozen have been lost to time. Some of these should’ve been forgotten because they were bad knock offs or otherwise sucked majorly. A few, though, were fantastic series that should be remembered more fondly than they were.

That’s where Definitely Dinosaurs comes in.

Definitely Dinosaurs was a late-80’s to early-90’s line of, well, dinosaurs. The set included several series of dinosaurs and several cavemen. I will let the fact that humans and prehistoric dinosaurs didn’t exist at the same time slide because this was a line for kids. These toys were made by Playskool and were essentially the late-80’s version of the Imaginext toys many of your kids are probably enjoying.

Being designed for younger kids, they were built a little more simply than similar series – think Dino-Riders – and a little more capable for being beaten up and not breaking. Still, the colors and sculpting were great and – although they were highly scientifically inaccurate for the time – they were fun and remind me of the old 30’s – 50’s dinosaur movies. These are big, lumbering beasts and not the fully realized animals they certainly were. Their goofy faces add to the fun.

The highlights of the line were the large Tyrannosaurus and the insanely huge Ultrasaurus. I mean it when I say massive. Ultrasaurus was a long-necked dinosaur that stood around 20 inches tall in toy form. It also had a little seat on the back that was very much a Flinstones creation. All the larger figures came with saddles and such, acting even more as a Dino-Riders-lite for little kids.

For those that do vaguely remember these toys, you probably remember the smaller, simpler Wendy’s kids meal toys. The Wendy’s toys were still colorful and fun in a retro way, but had much simpler or no articulation. They were basically large versions of the plastic dinosaurs you get in a bag at the dollar store.

For the collectors or people who want to pick up some fun dinosaur toy for their kids, most of these figures can be found loose for a couple of bucks to $20, depending on the figure or set. Only the stegosaurus, ultrasaurus, and tyrannosaurs really command and kind of premium. Plus, they look so much like regular dinosaur toys that they can be found in bins of random stuff – especially the Wendy’s meal versions – at flea markets and such. Be on the lookout for the early readers children’s books as well.

Dinosaurs are always a good idea for kids!