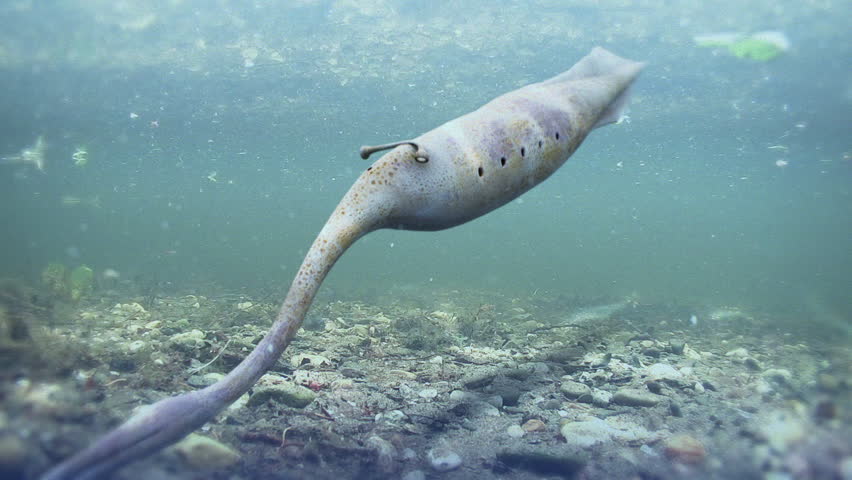 The Tully Monster is the Weirdest Animal of All Time

Nature sure loves some weird stuff. From aye-ayes to onycopherans to spinosaurs, there were some super weird animals that did or do exist. The weirdest of all time may be the Tully Monster.

The Tully monsters (genus Tullimonstrum) are an extinct group of very real animals, despite their name sounding like some mythological creature. They had bilateral symmetry, grew up to around a foot or so, and looked like… Uh…

Imagine if the basic outline of a Jesus fish had one long tentacle out front with a claw on it and had a couple of stalks with eyeballs. That sort of gives you an idea. This is just… I mean, come on. Nature was having some major fun back in the water 300 million years ago. It’s so fascinating and weird that Illinois made this cool beast the state fossil.

But what makes the Tully monster so weird is not that it looks insanely strange, but that we really have no idea where it fits on the tree of life. Monster every living or extinct animal has some basic features shared by a group. Extinct dinosaurs and living birds share many anatomical features and we have a series of fossils that show dinosaurs evolving and the birds evolving from dinosaurs. Snakes don’t look very much like a lizard, but both snakes and lizards have a series of genetic similarities and features and fossils that snow that snakes had a lizard (technically squamate) ancestors and so are in the group of organisms we call “lizards and snakes”.

What we know: It certainly looks like an animal, it has fins, eyes, and a mouth on a long tentacle-thing with teeth. Because of that, we would call it an animal in the group Bilateria. That is all the animals that are symmetrical down the middle, like us or frogs, and not symmetrical in a circle like a jellyfish.

Tully monster is a vertebrate argument: Researchers have looked at numerous features in the fossils and many believe it is a very basal vertebrate or the group of organisms just below vertebrates that became the vertebrates. Some features in the fossils appear to look like gill slits and a spinal chord. The fins on the fossil also look very similar to some basal fish fins, like lampreys. The eye pigments fossilized also look a lot like those of fish and vertebrates. Plus, the soft tissues fossilized look a lot like early fishes.

Tully monster is an invertebrate argument: The fossil eye structures don’t really explain if they are a vertebrate or not. Eyeballs vary so wildly in their structures and such that it might as well be like saying “it has eyes so it must be a person”. Plus, those fossil gills don’t look like any gills of living or extinct fish. There’s no gill skeleton, much of the soft tissue “identified” may just be from the process of fossilization and not real, and the jaw is so different from known fish that the Tully monster would’ve had to lose and the re-evolve their jaws.

Who Discovered This Weird Animal?

In the 1850s, the first fossil-bearing nodules were first found along Mazon Creek banks in Grundy County, Illinois. The fossil nodules were in a shale bed that lay on top of a coal seam.  In the 1920s, when strip-mining operations started south of Braidwood and near the intersection of Grundy, Will, and Kankakee counties, it exposed the nodules and made the area famous for fossil collecting.

Among the many researchers seeking fossils in the area, it was Francis Tully who first spotted the animal’s fossil fuel in the 1950s. With this discovery, he established a name for himself in the field of paleontology. He was an amateur fossil collector who took the specimen to a museum in Chicago for further examination. Paleontologists said they had never seen anything like it before and dubbed it as ‘Mr. Tully’s monster.’ The fossil is now known as the ‘Tully monster’. In 1966, the museum’s curator, Eugene Richardson, gave the Tully fossil its scientific name, Tullimonstrum gregarium, which was derived from the discoverer’s name. The Tully monster is unusual since the fossil was never unearthed anyplace else in the world, making it the weirdest animal of all time.

Personally, I like to think the Tully monster is some weird alien from another world that landed on prehistoric earth and took up a home eating snails and stuff. That, or it’s a really weird branch of the mollusks (snails, squids, and their relatives). I make that guess entirely on the fact that it kind of looks like what I imagine a killer, mutant slug would look like.