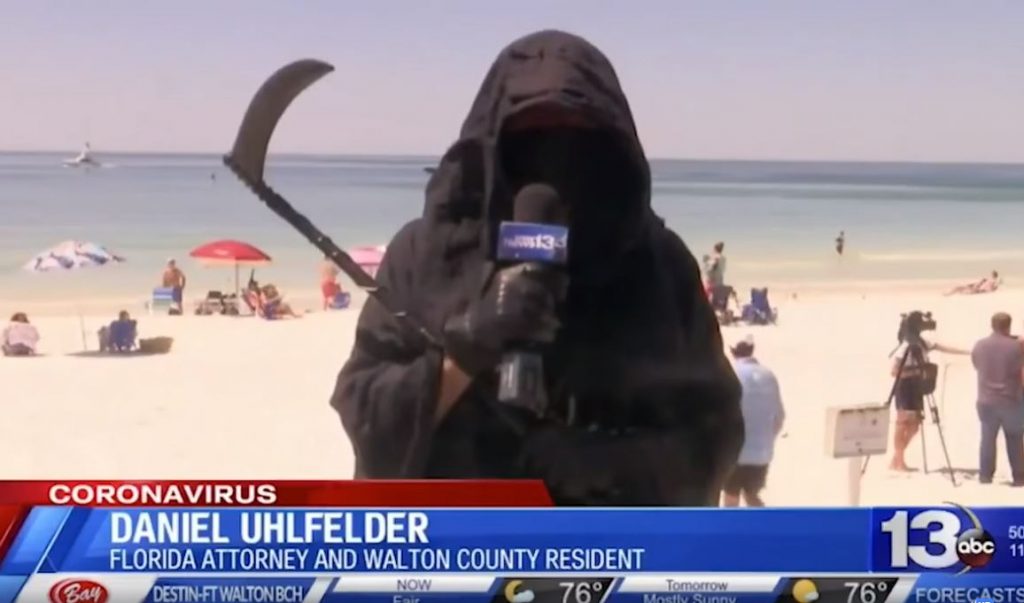 Not all heroes wear capes; some dress up as the Grim Reaper to haunt Florida beaches in protest of them reopening early. While most states across the country are doing their part to adhere to CDC guidelines, Florida is among the few that have largely ignored them. People flocked to the beaches the minute they reopened, so attorney Daniel Uhlfelder has decided to protest in one of the most original ways so far.

Dressed as the Grim Reaper, Uhlfelder walks the beaches while adhering to social distancing guidelines to remind people of the dangers of not staying at home. Equipped with full black robes and a scythe, Uhlfelder hopes the message is clear: death comes for those who reopen early. Even as a staunch advocate for public beach access, Uhlfelder believes that opening them during a pandemic is a mistake.

In an interview with CNN Uhfielder stated, “We aren’t at the point now where we have enough testing, enough data, enough preparation for what’s going to be coming to our state from all over the world from this pandemic…I know how beautiful and attracive our beaches are. But if we don’t take measures to control things, this virus is going to get really really out of control.”

In addition to protesting the beaches reopening, the Grim Reaper Protest is also an effort to donate to the campaigns of the Democratic candidates Phil Ehr and Christy Smith. Florida has approximately 35,000 cases and 1,314 death according to John Hopkins University. While there are a number of protests going on around the country, Daniel Uhfielder’s Grim Reaper Beach Haunting takes the cake for most creative and hopefully effective.