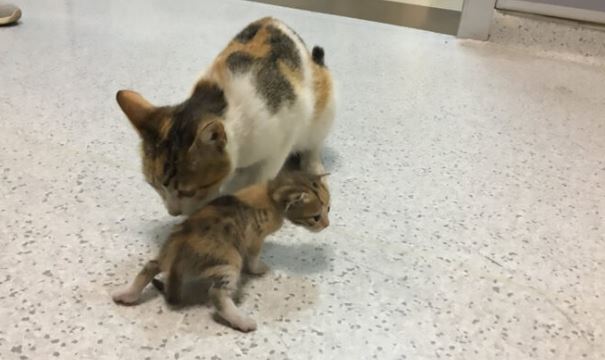 Stray Cat Carries Her Sick Kitten to Hospital for Treatment

When you are feeling sick, it only makes sense to go to the doctor. What if you are a feline though? Normally, your human would take it upon themselves to bring you to a veterinarian. One cat didn’t have the luxury of a loving home though. This stray mama cat took matters into her own hands when her kitten became sick. She decided to carry her kitten into a human hospital for care!

It was an average day in the emergency room of an Istanbul hospital. Undoubtedly, medics were rushing around to provide care to those urgently in need. Suddenly, a calico cat waltzes into the emergency room carrying her tiny kitten in her mouth. She doesn’t seem frightened of this unfamiliar place though. In fact, she takes her kitten directly to the nearby medics before setting her down. This is a cry for help.

It would have been easy for the workers to pick up the cats and place them back outside. After all, they had their hands full caring for their human patients. Instead, these workers decided to fulfill their medical oaths in the same manner they do with humans. The kitten was brought to a doctor to be looked over. Meanwhile, milk and food were given to mama kitty while her baby was thoroughly examined. Both cats were given a bill of clean health by the doctors, but were sent to a veterinarian just to be safe.

These adorable moments were captured by Twitter user Merve Özcan.

Renter Discovers Strange Noises Under House Was Family of…