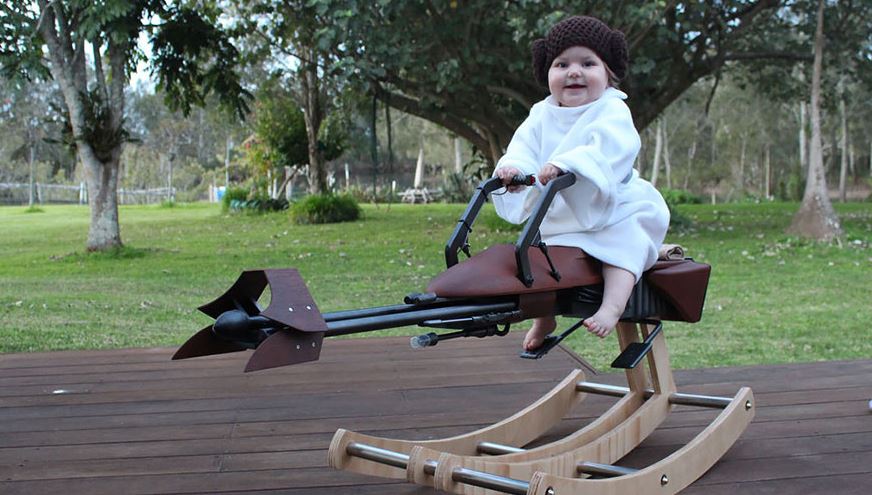 Created by Tez_Gelmir who posted it up on Instrucables.com he made the speeder for his daughter who was turning one. He also had some other considerations in mind when building it because there’s also a five year old in the house. No doubt that five year old would want a turn too.

My first consideration was strength and stability for the safety of the little ones, as though this project is for my 1y/o, I also have a 5y/o who no doubt will want a turn. The need to be strong enough to handle a beating led me to the first part of my design, a rigid backbone with a solid plywood top for the seat platform. This gave me a good foundation for things like the handles and outrigger to mount from, and somewhere to fix the 3D printed hull shell.

He talked on his blog about why he made the speeder and reading it just makes happy that there are considerate and crafty dads out there.

I have built my son lots of projects but with my daughter’s first birthday coming up I felt it was her turn to get some project love and what better way than with her own Speeder Bike?!

The 74-Z Speeder Bike is best known for its appearance in the 1983 movie, Star Wars: Episode VI: Return of the Jedi. In which Imperial Scout Troopers, on the forest moon of Endor, engage in a vicious chase with Luke Skywalker and Princess Leia Organa after the Rebels commandeered the speeder bikes to pursue their foes.

I have to say though, when the design first came to mind, I had no idea the time and thought that would be involved….

I’m sure we will see much more from Tez Gilmir in the future. You may want to follow him on Instructables to keep an eye on his future projects.