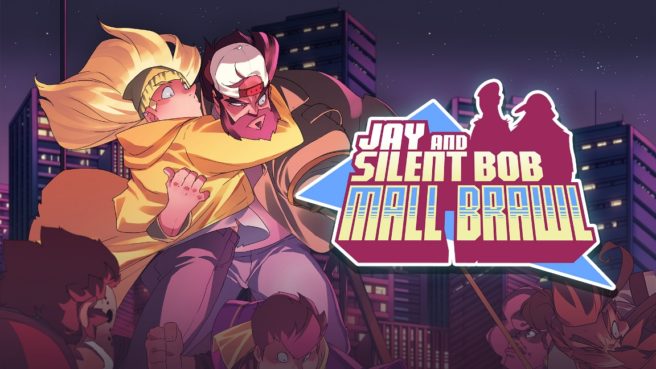 Get ready because come May 7th, Interabang Entertainment is bringing Jay and Silent Bob: Mall Brawl to Switch. If you needed some more Jay and Silent Bob action you just found it with this new game. If you don’t have a Switch it will also be available to play on Steam.

“Jay and Silent Bob: Mall Brawl features 2 player co-op action with an 8-bit aesthetic and gameplay style simulator to action brawlers on the (NES), particularly River City Ransom (1989) and Double Dragon II(1988). Mall Brawl was conceived as a free digital bonus game for backers of the crowdfunding campaign and available for fans who want to pre-order the deluxe edition of Chronic Blunt Punch.”

“Play as Jay and Silent Bob in a retro 8-bit sidescrolling brawler. Go solo or team up with a friend. Pummel enemies with hard-hitting combos, dash attacks, and elbow drops as well as a random assortment of weaponas as you battle your way out of the mall and back to the Quickstop.”

Pricing for Jay and Silent Bob: Mall Brawl is set at $14.99 on the Switch eShop.