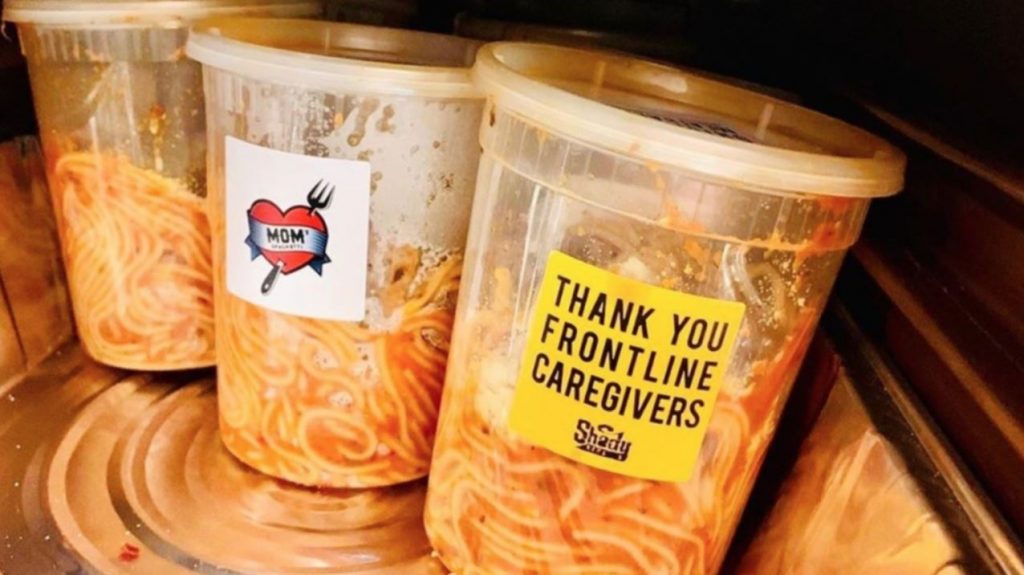 “Mom’s Spaghetti” immediately makes a certain Eminem song come to mind for most of us.  But earlier this week, the rapper himself donated spaghetti meals to health care workers in Detroit, calling them “Mom’s Spaghetti”.

Funded by Eminem and the Marshal Mathers Foundation, the Detroit catering company Union Joints was able to prepare and send tubs full of spaghetti to health care workers in the area.  The spaghetti has been affectionately referred to as “Mom’s Spaghetti” as a reference to the song “Lose Yourself”, which Eminem performed for the movie 8 Mile.  The meals were donated as a thank you to those working in the front lines of the COVID-19 pandemic; Detroit is one of the areas that has been hit by an outbreak of the virus, and is also Eminem’s hometown.

Each tub of warm spaghetti was labelled with stickers from Shady Records, one featuring a “thank you front line caregivers” message with the Shady Records logo beneath it, and another sticker with a heart and a fork labelled “Mom’s Spaghetti”.  Tweets from the Henry Ford Health System, based in Detroit, joked about how the health care workers “lost themselves” in the delicious spaghetti.  Detroit Medical Center also tweeted out their gratitude after receiving meals for their workers.  Someone representing Eminem has also confirmed that he will be donating to several other hospitals in the area.

Evidently this isn’t the first time Eminem has made this meal available.  With the help of Union Joints, the meal was served at a food stand during Coachella in 2018.  In today’s times, the donation of these meals is definitely a super cool thing to do.