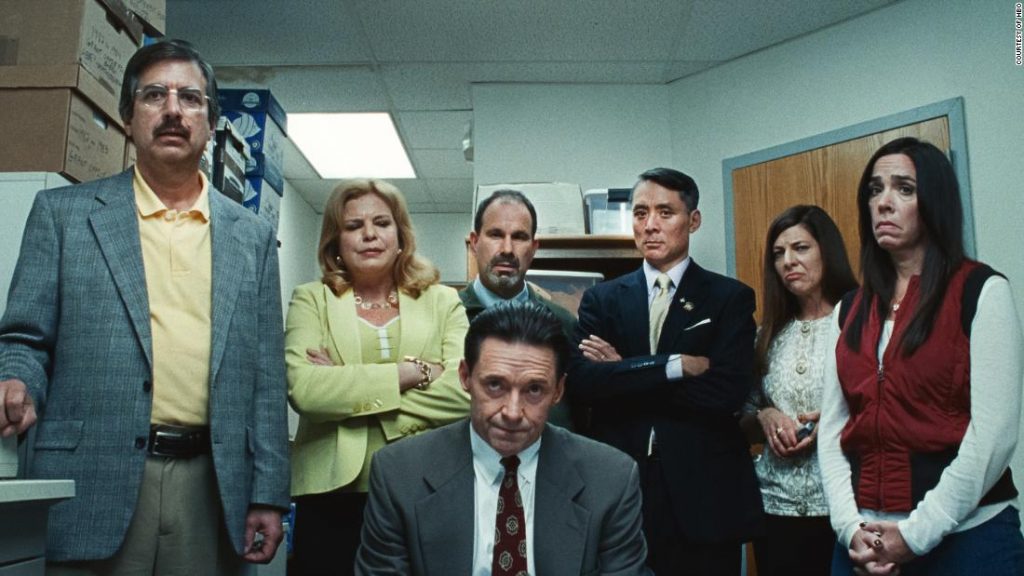 In a time when almost all scandals seem to come to light one way or another, HBO has made no secret about their desire to tackle as many white collar crimes as possible. From the Elizabeth Holmes Documentary Out For Blood to the riveting Mcdonald’s Monopoly scandal McMillions, the network has a knack for uncovering some of the more surprising yet not at as glorified or violent crimes out there. We have a tendency to distrust people in power and often have suspicions that there may be something fishy going on, but HBO shines a bright light on these stories of scandal and does so with a top billed cast, a chilling score, and a focused direction.

Bad Education tells the true story of how Frank Tassone (played by Hugh Jackman), a Superintendent for the Rosyln School District in Long Island and his accomplice Pamela Gluckin (played by Allison Janney) embezzled close to $11 million in public school funds over 12 years to maintain a lavish lifestyle of luxury far beyond the normal salaries of most public school employees. The story was first broke by Rebekah Rombom (renamed Rachel Bhargava for the film and played by Geraldine Viswanathan), a student and editor for the student paper which then blew up to national attention.

Bad Education is elevated by its focused pacing and superb cast, with Jackman, Janney and Viswanathan all bringing their skills to breath life into an otherwise open and shut case of fraud. While their real life counterparts lived a larger than life of luxury, they are only mildly eccentric with Janney in particular invoking a sympathy to a woman who simply provided for her family in all the wrong ways.

A true stand out here is Jackman, an actor we often have a hard time with seeing as anything other than Wolverine but proves time and time again that he is more than the ripped shirtless superhero. Jackman’s portrayal of Tassone as arrogant narcissist with a false sense hero syndrome bring thrills to what could be a low energy movie. Likewise, Geraldine Viswanathan tones down her snark from her work in Miracle Workers and brings to light the consequences and emotional toll doing the right sometimes brings.

The scoring by Michael Abels and the Cinemotography by Lyle Vincent give us the unsettling yet darkly humorous sound and visuals a simple story like this needs to remain interesting. With dull color pallets of grays and blues, the visuals work to downplay the lavishness of our main characters’ taxpayer spending spree and highlight the disruption and consequences a scandal like this coming to light caused.

Director Corey Finley, hot off his critically acclaimed previous film, Thoroughbreds, brings a keen eye for the slow burn steady shot while still managing to tell a compelling story and bring out the best from his actors. Where the film struggles is with its subplots. It seeks to provide some insight into what would drive individuals to steal from the very people they are trying to help but because of subtle nature, it doesn’t quite achieve this as some of these threads search for relevance even until the very end. The film can’t be faulted too much for this though, as it seeks to be more of character study into people who seem to start out wanting to do what’s right but who ultimately let unchecked power corrupt them.

Bad Education a slow placed examination of the individuals involved in one of the largest embezzlement scandals few people have ever heard of. As stated before, this seems to be a hot ticket for HBO; exposing scandals and stories that seem make believe but are in fact rooted in true stories. This is not a heist movie or even a look at what embezzled money can buy.

Bad Education is at its core about what happens when power goes unchecked and who ultimately pays the price for actions that seem harmless so long as they stay in the dark. While it doesn’t quite have the exaggerated zip of something like The Social Network, it is no doubt a film worth watching. With a strong cast and fascinating story toned down to examine the less talked about aspects of embezzlement scandals, Bad Education is a welcomed addition to the growing category of HBO’s true story expose. Spoiler Alert: Jackman leaves his shirt on the whole time.