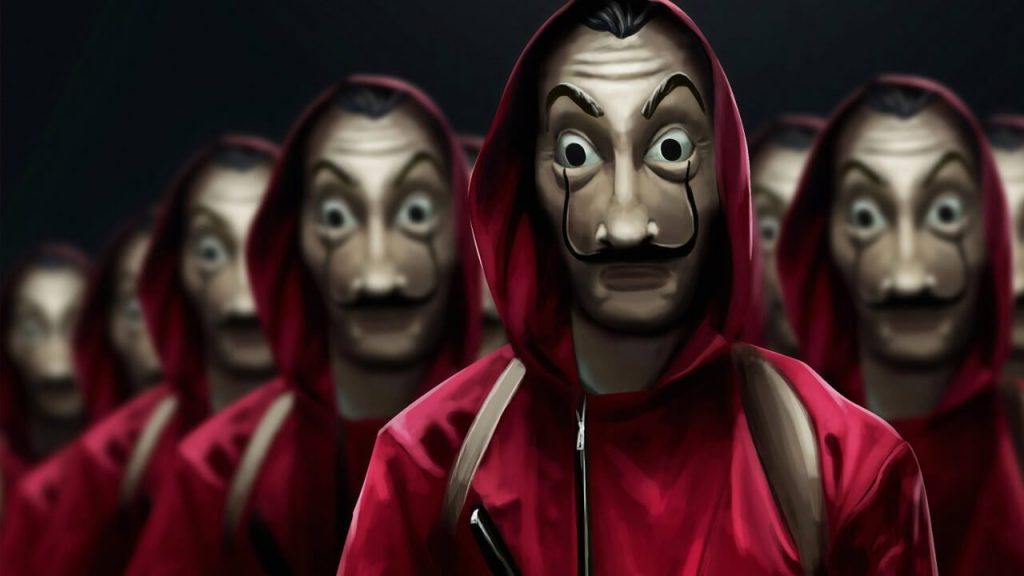 In a world of quarantine and countless streaming options at our fingertips, it can be overwhelming deciding what to watch. Even during normal times we would spend more time scrolling through Netflix than we would actually watching Netflix. Now with nothing but time on our hands and more streaming options than we can keep track of, it seems even more difficult to find a satisfying selection. Choosing a new show to invest in is even more challenging, especially one that has a rather unattractive title like Money Heist. To be fair, in it’s native language the show is actually called La Casa De Papel, which sounds so much better and dare I say, sexier. However, if there was ever a time to try something new, the current state of the world it the perfect opportunity and Money Heist should be at the top of your list.

I don’t blame you for not having watched Money Heist yet. I stumbled upon it by accident while searching for something new for a project I was working on. I didn’t even know what it was at the time, but Netflix insisted that I would like this show and in every category kept showing me the red jumpsuit and Dali Mask. While Netflix isn’t always the most trustworthy when it comes their recommendations, I decided to give it a shot.

I binged the first 2 seasons in a single weekend and both seasons 3 and 4 in a single day. It was like watching a more dramatic Ocean’s 11 on steroids, with everything from the drama to the action to the characters ramped up to 1000. It is a wild ride and as we dive a bit deeper into it, unlike any other heist show or movie out there. It somehow manages to avoid the pitfalls committing too hard to tropes while also allowing those same tropes to take shape in new ways. It is truly an immersive experience, one that I wasn’t prepared for when I started but now can’t seem to get enough. Money Heist is a hidden Netflix Gem that grips you immediately, holds on tight with every episode, and never gives you a moment to catch your breath until the final credits roll.

Money Heist is a Spanish television show about a group of criminals brought together by a mysterious strategist and planner known only as The Professor. He has put together an intricate and complicated plan to rob the Mint of Spain, an impossible heist that can only be done if everything is followed to his exact plan. Our rag tag group of criminals are gathered together in a remote location for training, complete with notebooks and a full scale model of the targeted building. They are named after cities to avoid getting too close to each other which, spoiler alert, doesn’t really help much as forbidden relationships are quickly developed between members almost immediately. The show is narrated by Tokyo, played briliantly by my new television crush Ursula Corbero. If The Professor is the Strategist, Tokyo is the wild card; an unpredictable embodiment of chaos and destruction all hidden behind a beautiful face and disarming smile.

To execute this complicated plan, they must purposefully lock themselves into the Royal Mint for at least two weeks and without spoiling anything, they handle their quarantine about as well as you would expect now that you’ve seen how humans react first hand. It is interesting that now more than ever, this part of the show that seemed impersonal is now more relevant that ever as we are all stuck in a place we don’t necessarily want to be and the only way out is to follow the plan and stay put til the job is done. Once the heist begins, the show goes full throttle with thrills and cliffhanger endings while simultaneously developing each individual character who are increasingly cracking under extreme duress.

This is perhaps the first of many great things about the show, the balancing act of thrilling fast paced heist action with creating very real, complicated characters. There is not a single person who seems one note, regardless of their respective character identifiers. For Example, Denver has perhaps the most annoying laugh in the entire show, and a less competent showrunner would seek to exploit and define him by it but not here. While it is definitely a staple and identifier of the character, Denver is a young man struggling with his own anger, reconciling his past and what kind of man he wants to be, his relationship with father, and the facade of being a macho man when really he is an empath who seeks connection. Every character, whether central or not is given this kind of care and concern, bringing to life a roster of characters we can truly invest in and care about every step of the way. They constantly express a range of emotions and no one is ever one thing all the time. The characters transform under pressure, and every single actor, big or small carries their weight.

The show also explores a number of themes including family relationships, symbolism, love, mistrust, and symbolism. From Dali masks representing revolution and resistance to the repeated anthem of Bella Ciao, everything in this show is purposeful and done with intention no matter how subtle. Even in the shows writing is purposefully poetic and written in a proper Spanish dialect that even Spaniards don’t actually speak regularly. It is because of these details that make the show even more intriguing and a must watch with subtitles. Removing the subtitles actually robs the intentional writing and therefore lessens the impact of events. These things are enhanced by truly stunning visuals and set pieces, designed to be as accurate as possible. The dark pallets of reds and the royal architecture of the building create the sense of claustophobia and paranoia that continually plagues our antiheroes.

Money Heist also deals with the unpredictability of human behavior. This is perhaps most demonstrated through The Professor who is played by the ever cool yet socially awkward Alvaro Morte. Here is a man who has left nothing to chance in his plan, a Batman like approach to his crime with all contingencies covered. But even a man who plays chess while others are playing checkers, the pieces are not lifeless figurines on a board. They are humans, and no matter how well he has predicted their behavior and assigned them each specific roles as well as stress the importance of sticking to the plan no matter what, they are constantly misbehaving in all sorts of ways. They continually push The Professor to act on the fly and adapt which is nothing something he’s use to doing and it shows. For a man who always has his best foot forward, watching his team as well as the police outside constantly put him on his heels is a cat and mouse game all on its own.

Because Money Heist is constantly struggling with following the plan and our protagonists continually cracking under the pressure, it is chalk full of surprises and jaw dropping moments. It comes as no surprise to learn that the showrunners don’t have a plan for each episode set in stone and willingly change the script and plot points on the fly to accommodate characters and their specific reactions to situations. This is a gamble that tends to fail more than success, but somehow it pays off episode after episode. Even when you think it’s over, there’s more. And even when you think there can’t possibly be more, there is. And just when you think they can’t possibly surprise you, they do.

Money Heist elevates its premise with superb acting, calculated yet unpredictable characters, and gripping story that truly gets better the further you go. So strap in, grab your quarantine snacks and favorite wine and get lost in an impossible heist with terrific and interesting characters. Money Heist has 4 seasons available for streaming on Netflix and without spoiling anything, clear intentions for a season 5.