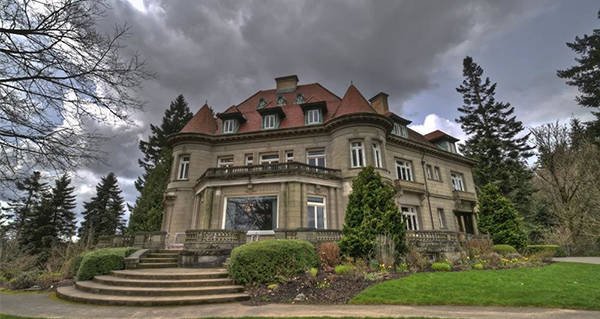 Stuck home and looking for a spooky adventure? Well you’re in luck! Many haunted places throughout America are currently offering virtual tours to horror fans of all ages. Let’s take a look at five of the coolest places you can see!

Henry Pittock was a successful newspaper publisher who built a financial empire in silver mining, sheep ranching, railroads, banking and many other industries. In the early 1900s, alongside his wife Georgiana, he began planning his “mansion on the hill.” Their French Renaissance-style chateau was completed in 1914. Sadly, the couple only got to enjoy the home for four years before passing away. Some say the couple never really left their dream home though. To this day day people claim to see apparitions of a husband and wife wandering the home. Discover for yourself if the Pittocks are still there.

The Borden family were a typical American family. That all changed the morning of August 4, 1982. On that day, Lizzie’s father Andrew and stepmother Abby were found butchered inside their home. Only Lizzie and the maid were home at the time of the murders. The maid was quickly ruled out, but suspicions of Lizzie were high. A hatchet with a recently broken handle was found in the cellar. Additionally, eyewitness testimony claimed to have seen Lizzie burning a dress. Lizzie was brought to trial, but with no conclusive evidence she was legally acquitted. To this day many speculate on whether Lizzie was the murderer or not. Explore the house for yourself and decide if Lizzie was a victim, or the most nefarious character of all. You can even stay the night there.

On May 27, 1936 the Queen Mary took off on her maiden voyage from England. She was a luxury liner carrying the rich and famous from across the world. She even set a new speed record for ships which she held for 14 years. After only three years though, she was converted into a troopship for World War II and carried as many as 16,000 troops. It was during this time that the ship would see a lot of death and misery. In 1967 she was officially retired and became a hotel and attraction in Southern California. Explore the halls of the Queen Mary and perhaps you will spot the White Lady or the unfortunate man who met his end in the boiler room.

Eastern State was the world’s first penitentiary and extremely expensive to construct. Inside the penitentiary, all contact between prisoners was strictly prohibited. Cells had feed doors and individual exercise spaces to limit human contact. When inmatess were taken from their cells, they wore masks to discourage them from talking or looking at other inmates. Many prisoners died there with little human contact for a majority of their lives. Throughout its life, the penitentiary was home to notorious criminals such as Al Capone, Freda Frost, and “Slick Willie’ Sutton. Take a journey through its crumbling halls and see if the confined criminals still linger.

After losing bother her husband and daughter, Susan Winchester packed up and moved to San Jose to start anew. As widow to the heir of Winchester Repeating Arms, Sarah spent the remaining 38 years of her life constantly remodeling and expanding her home. By the time of her death, the home had grown into a 24,000 square foot mansion. Staircases that lead to nowhere, doors on upper floors that open to air, and windows that don’t show the outside are just a few of the many oddities inside of the home. Some say Sarah kept building for fear that the ghostly victims of Winchester rifles would come for her. Did this strange house keep the ghosts at bay or are they simply waiting for new victims to arrive? Find out for yourself.