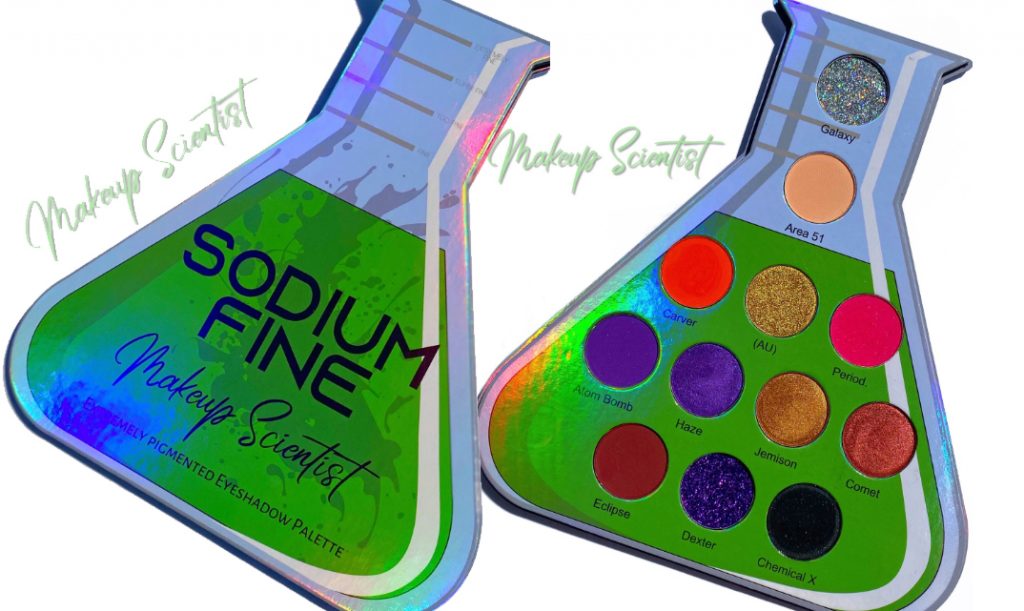 Prep the lab and grab your instruments because the Sodium Fine Eye shadow Palette is ready for pre-order for all the MU-Scientists out there.

This palette has 12 colors which vary from shimmers, glitter mattes, and pressed glitter pigments. The palette itself is shaped like a erlenmeyer flask that fits comfortably in your hands, with a pan size of 12 mm.

The pallet was released on April 4th and sold out on the same day, and people are already pre-ordering for the palettes restocks. Creator Jess N’neka, owner of the Make Up Scientists Cosmetics and MUA for hire, first started developing the project back in late 2018.

“Science is so fascinating so combining these two concepts together I thought would be really cool,” says N’neka in an interview with Nerdbot. “I wanted to design a palette that would have all consumers intrigued with just the shape of the palette.”

She took to twitter to announce her latest creation, later revealing the finger swatches on her arm in the announcement thread.

This small business owner started her makeup journey back in 2017, cultivating over a thousand followers on her Instagram .She also graduated from East Carolina University for Hospitality Management, minoring in Business Administration.

Her first creations are glitters in test tubes called “experiments”; later creating a loose eye shadow and multiple lash sets. After producing these, she began researching into the the overall applications(cultural and physical) that science has in society.

“Once I learned more and more the concepts with names and colors begin to flow, for the first palette I know I wanted to do something with vivid shadows.” says N’neka.

During the two years of development, she ran into “MANY obstacles”; all the while keeping to the mantra of ‘taking your time towards perfecting your plans’. And based on her selling out the day of, it’s clear that her hard work paid off.

N’neka Assures Nerdbot that there’s plenty more planned from Makeup Scientists Cosmetics, a continuation of a promising rise for up and coming cosmetics company.

You can check out more of Makeup Scientist Cosmetics products at https://makeupscientistcosmetics.com/