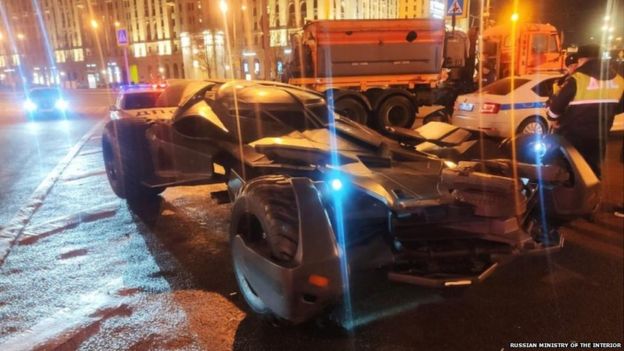 Making your car yours and customizing it is always kind of a gamble. Unless you add decals or maybe tinting on the windows, you always have a chance of doing something that authorities might call “un-roadworthy”. And if that happens then you get your vehicle taken and potentially can’t drive it anymore. Unless you have streets or a giant roadway behind your house, it will be pretty much garage ridden.

One Batman fan in Moscow decided to customize his vehicle to look like the Batmobile. And while it was really cool it was also seized by Russian officials. They cited that it was “not manufactured within factory conditions” and was neither registered with authorities nor certified as roadworthy – the Russian equivalent of an MOT test. They also said that it would probably not pass to become street legal. So that’s pretty disappointing for the owner I’m sure.

The 32 year old man who owns this vehicle is now being investigated for three different things concerning the car. The vehicles lack of documentation, it’s excessive weight and size and the irregular features that aren’t permitted on road driven vehicles. The owner should have at least had the documentation on him, but hey we all make mistakes.

What do you think of the car? Pretty neat right? Tell us in the comments what your dream car would be.