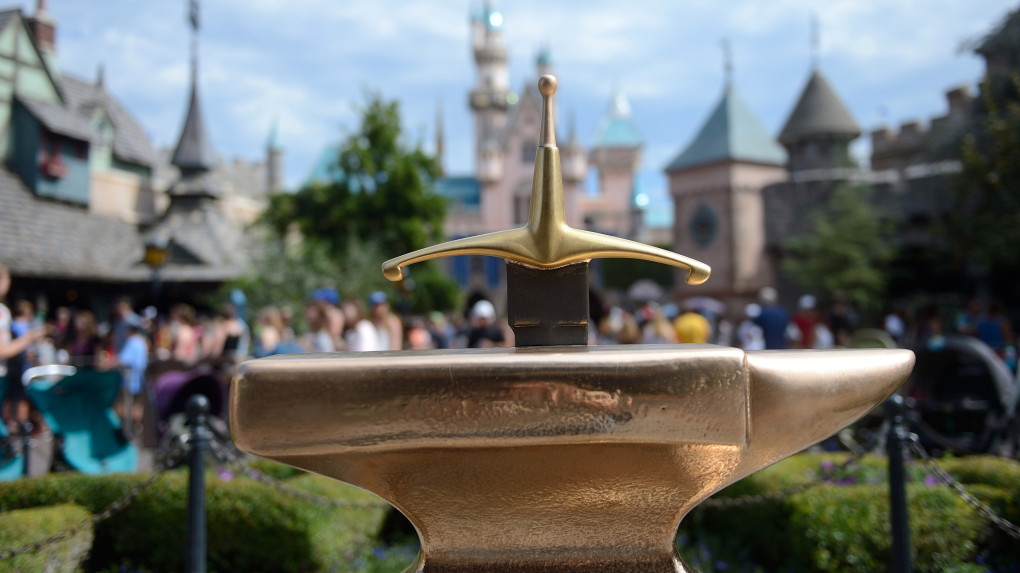 The Sword in the Stone sits in front of King Arthur Carousel. The attraction is based on the Merlin, King Arthur and Excalibur. (Photo by Jeff Gritchen, Orange County Register/SCNG)
Nerd Culture

Excalibur Was Removed From Disneyland By A Buff And Burly Guest

If you’ve been to Disneyland then you know for a fact that in front of King Arthur’s carousel lies Excalibur. It’s a great photo opportunity for you to try to take the sword out. It also leaves for a lot of well, daring I guess. many have tried and no one can really ever pull Excalibur. Although I do recall that in one episode of Full House I believe Michelle pulled Excalibur from its resting place and she got whatever wish she wanted for the day at Disneyland.

But I digress, the sword in the Stone sits there and pretty much will never be pulled. Well, that was until on January 12th Disneyland Excalibur sword went missing. A buff and Bury dude known as “Sam” removed the sword from the stone. Stunning everyone around him.

“He literally ripped it out,” an eyewitness told WDW News Today. “It was his first time at Disney and he’s a pretty buff dude. I told him if he pulled it out he’d win a prize and he just used brute force I guess.”

The sword was returned thankfully, albeit broken and jagged tape was placed where the hole was to keep visitors safe while the sword was away.

“At first it seemed as if he had pulled it out, but a (cast member) quickly came over (because) he had in fact broken it,” the second eyewitness said.

Can we all say, oops!