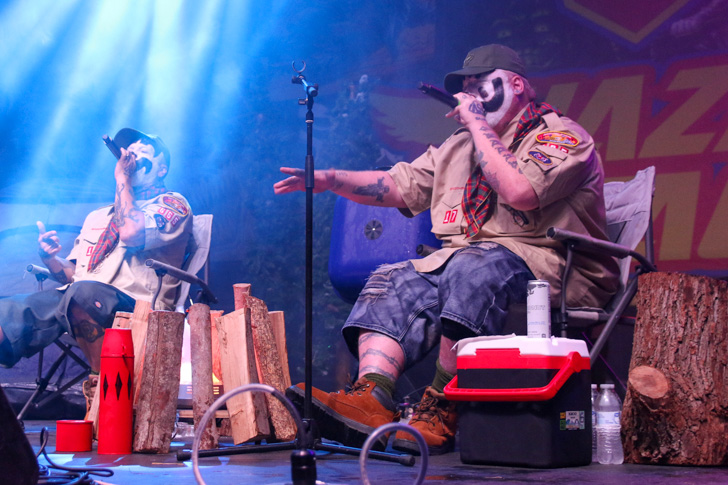 After 15 Years, The Gathering Of The Juggalos Comes Back To Ohio

Time to ready your drugs and Faygo three liters because Insane Clown Posse’s Gathering Of The Juggalos festival is coming back to the Buckeye State.

Reporting from WKBN.com out of Youngstown has confirmed that after a fifteen year absence the four day extravaganza is returning to Nelson’s Ledges in Garretsville, which is about an hour or so southeast of Cleveland. Since The Gathering’s inaugural gathering in 2000 it has taken place at various locations throughout the Midwest including Novi, Michigan and Oklahoma City. Nelson’s previously hosted event three times in the Mid-Aughts. Following each installment the grounds of the park were left looking like a demilitarized zone which forced Shaggy 2 Dope and Violent J to take the festival elsewhere.

“The first year went off without a hitch, you know. Everyone was respectful and everything and then it kind of declined in integrity and stuff over the next couple years. I think people got comfortable with it being here and took it for granted,” said Nelson’s Ledges co-owner Kristina Kelly.

The park does take pride in the cleanliness of their grounds… I can only imagine how many Faygo bottles the crew picked up. But Kelly does believe this year will be different.

Aside from Insane Clown Posse, the festival showcases various artists under the Psychopathic umbrella but also manages to land a few nostalgia acts like Vanilla Ice and Tila Tequila. Yes there will be face paint, people wearing Great Milenko hockey jerseys in 90 degree weather, and possibly a bunch of dudes slamming their heads into a stop sign. I’d bet on some type of Who wouldn’t want to go?

The 2020 Gathering Of The Juggalos is scheduled for August 5th through the 8th at Nelson’s Ledges.

Who’s ready for some Juggalo action? Let Nerdbot know in the comments!!