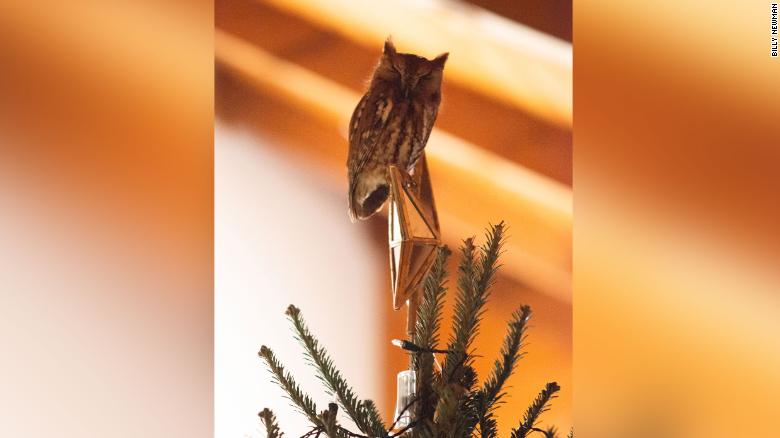 It’s the holiday season and you and your family (or perhaps yourself) go out to pick out that special Christmas tree. The one that will envelop all of your ornaments and lights and just bring the balance to all things in your life. Ah, opening the window the night air is crisp and you can hear the small hoots of an owl. Except the owl is inside your tree!

One Georgia family got more than what they had bargained for when picking out their tree. The Newman family has a tradition that the day after Thanksgiving they go out and get that special Christmas tree. Well last week after dinner mom was clearing the table and she heard her young daughter exclaim “Oh my gosh!”

Katie (mom) has explained that she is a fan of owls and as such had a few ornaments and had only thought that her young daughter must have gotten spooked by one of them. So dramatically the daughter rushes to her mother in tears and explains what she has seen.

Yup a live owl was living among the branches for probably weeks! So they shut off all the lights and opened a window hoping the little guy would make his way out. But when the family awoke the next morning the owl stayed. So they called Chattahoochee Nature Center for help, they instructed the family to leave some raw chicken out because the poor dear must not have eaten for some time.

But last Saturday, an employee of the Nature Center came out to inspect the bird, who was a little thin but gave the bird some supplemental shots and instructed the family how to re-release the owl back into the wild. Following the instructions, they carefully placed the bird into a crate and waited for dusk to happen. Then at night they opened the crate up to release the owl leaving it alone. They came back the next day and the bird was gone. Whew!

What a way to spend the holidays!