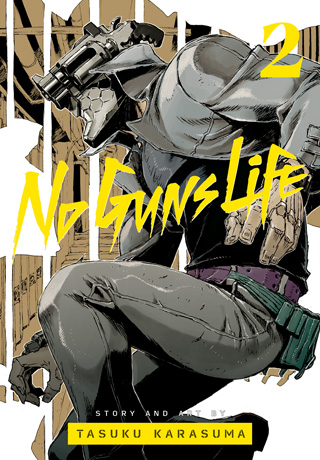 Volume two of No Guns Life couldn’t come fast enough. There’s something about this manga that doesn’t allow you to put it down, if it’s not with the noir style or the mystery that keeps building higher and higher, even the never ending lore that keeps getting tacked on to the story panel after panel.

As stated before Vol 2 dives so much deeper into the world of No Guns by introducing so much more diversity into the story. For example in the first volume you’ll almost led to believe that the Beruhren is pretty much the king. But with the introduction of the EMS is shakes things up a but shining a light on a different organization that comes into play. One that isn’t necessarily a bad one but sometimes will have to act in a gray area to get what needs to be done. Alongside with the EMS they aren’t corporate like the Beruhren.

As a matter of fact they actually care about the others and genuinely want the best for others. With characters like Olivia who comes off extremely flirty and a bit devious but uses that to help save lives in the process. And on the other hand you have people like Kronen who are simply just hot headed. And only care about one thing and that’s getting the job done. But the more the story goes on the more you see a little more of a human side of him with great character development moments (what little he has) and even more badass fight scenes he has.

Even though the main plot takes a bit of a pivot from the vol 1 it still feels very natural. They even introduce oliva near the end of part 1 but just for a second and then she’s gone. So her appearance was a nice surprise. It changes from taking down a big corporation to trying to solve and prevent murders which is a nice combination. Watching Juzo put all the clues together bit by bit was honestly one of the best parts of the manga. Not only because it was satifaying to solve the murder but because it gave more lore on who he is and what kind of extended he was based off of.

Without giving too much away it dives deep into some of the original extended and what kind of people they were. Even going as far as showing what they’re doing now in the world. While some are basically super stars and some have just been forgotten and disregarded.

With twist and turns coming at you left and right near the end of it is more than enough to keep you at the edge of your seat wanting to know what is going to come next. Trying to find out why there is this chain of murderings happening, to finding out who is doing the killings. And to top it all off the ending is almost a work of art. Giving you something so sweet just to leave you wanting more. The last few panels honestly got me a bit frustrated not because it wasn’t good but because I didn’t want it to end.

Even though vol 2 doesn’t really focus on Juzos friends it doesn’t really slow down the story one bit. It actually builds upon it showing his ties to the world and what kind of things he’s gotten into in the past that we didn’t see. With the introduction with a cast of new characters they all seem to fit naturally and gave a lot of depth to the story.

This is a manga that honestly keeps getting better and better I highly recommend you read it. It’s out now and cost 12.99$(USD).