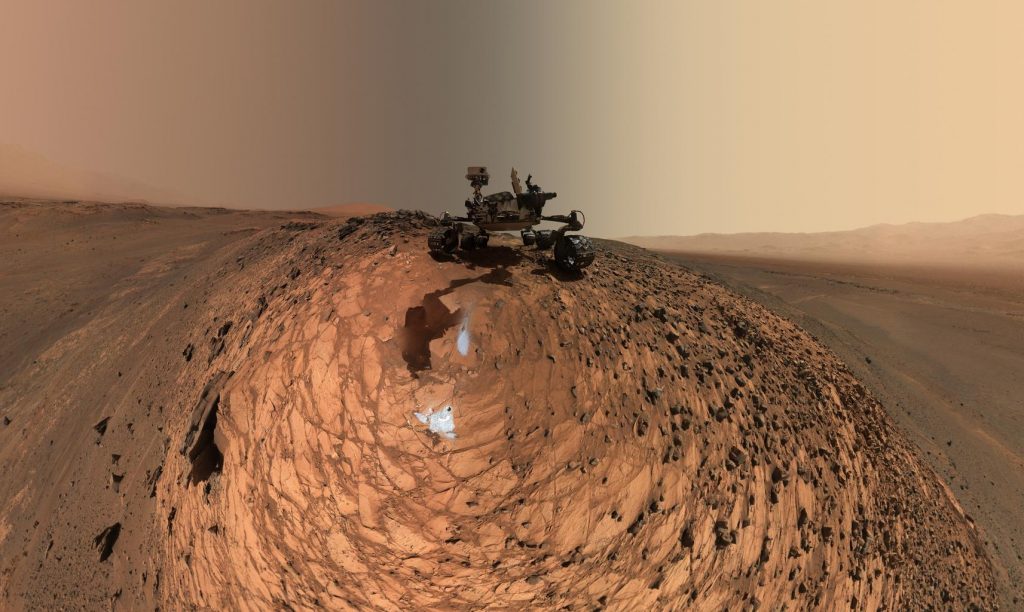 There’s a very good chance we will find life on Mars in my lifetime.

There’s also a very good chance that life will be tiny microbes or possibly multi-cellular aggregate organisms made of tiny microbes living communally.

Mars, the red planet that’s just a big smaller than ours and a bit further from the sun, has a long history of being a really good candidate for life. William Herschel showed that the Martian polar ice caps were growing and shrinking seasonally. Assuming those ice caps are mostly water ice, that’s a good evidence for some kind of water cycle on Mars, however small. On earth water is a really good predictor for life.

In the late 1800’s, Percival Lowell was looking through a telescope and made a grand discovery… canals on Mars! Mars was crisscrossed with canals like those of Venice or the Eastern US, used for transporting people and goods via ships and moving water to and from places.

Around the same time Lowell was seeing canals on Mars, H. G. Wells was writing War of the Worlds. War of the Worlds is one of the earliest works of “true” science-fiction and began the trope of aliens invading our planet for some reason .At least the logical here is that Mars was a dying planet and we were next door. It makes a lot more sense than, say, Independence Day. (The universe is gigantic and full of things like water. You don’t need to fly infinity light years to our crappy world…)

Mars was a living world full of weird aliens we could go and meet and chill with and play Martian games with!

Then reality came crashing down. After the 1900’s, technology was exploding. Better telescopes showed that the canals and other features seen by early astronomers were natural, geological features. There weren’t cities of glass or space ports or trees. Spectroscopy and other cool advanced technology showed that Mars probably had some organic stuff on it, but it wasn’t exactly a fun weekend trip for earth. The atmosphere was thin and oxygen was scarce.

Mars is about half as big as earth. Imagine earth was just the major continents crushed together and the oceans were gone, and that will give you an idea of its size. As such, it hasn’t held an atmosphere as well or been as geologically active for as long. It might have started as a wet world with some early life but now it’s dead.

Flash forward to 2019 and we have a robot on Mars. That robot is giving us a lot of date. Previous probes and experiments have also given us a lot of data. Mars might – and this is a very tenuous MAYBE – have life. And now science has some good evidence.

The oxygen levels on Mars go up and down following the seasons. Mars has higher levels of methane than expected from a geologically mostly inactive planet. The key thing here is the methane and oxygen aren’t common unless biological activities are around, and here they are going UP during Martian spring and summer, and DOWN when Mars is way too damned cold for life.

There ARE geological means for making methane and oxygen, but…

Dr. Gilbert Levin and a few other NASA scientists and astrobiologists (biologists but for space) are convinced we have evidence of life on Mars in the form of microbes, going waaaayyy back to 1976. The Viking mission landed on Mars, found possible microbes, but also maybe just soil chemistry that was weird.

Me? I am a biologist. I am not a geological expert but I am certainly convinced that life is more common in the universe than we know, but that life is likely to be mostly tiny organisms that might even push our idea of “alive”. Things like self-replicating little viral critters or bacterial creatures so basic they don’t do much other than eat and split into 2 are probably on Mars. We have a lot of evidence for it. They might also be on other plants, in the high atmosphere of Venus, on moons of Saturn and Jupiter, on comets…

The worst case scenario that we can make Mars like earth using advanced technology… at least for earth’s greatest life form.

What planet, moon, or object do you think will be the first with evidence of life? Let Nerdbot know in the comments!