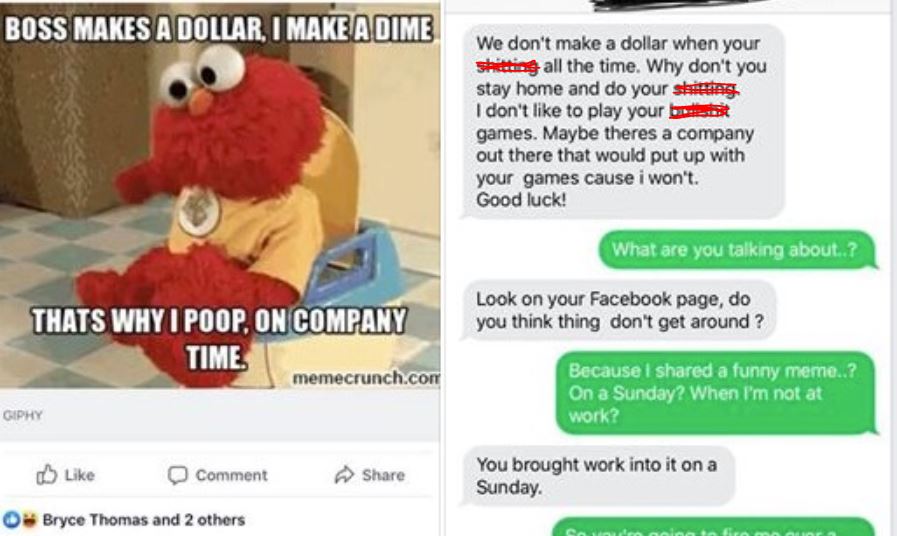 Man Says He Lost His Job For Sharing a Meme

A man in Detroit says that he lost his job for sharing a meme. You know the one we’re talking about. The one with Elmo on the toilet that says “Boss makes a dollar, I make a dime. That’s why I poop on company time.” Well Cody Hildalgo age 23 shared it and then claims to have gotten a strongly worded message from his supervisor at his place of business.

It said in part, “We don’t make a dollar when you are s****ing all the time. Why don’t you stay home and do your ****. I don’t like to play your bull**** games, maybe there is a company out there that will put up with your games because I won’t. Good luck.”

There has been some back and forth over what really happened. The company Roman Stone Works from Detroit’s west side said that Hildalgo was not fired and continued to work the next Monday, Tuesday and part of Wednesday when he voluntarily walked off the job.

Hildalgo said that he wen’t in because there was no response after the text message he recieved from his supervisor when he asked if he was fired. He wasn’t sure if he WAS fired, but after going in the first few days the “Bad Blood” was obvious and he decided it was better if he just left.

“Cody Hidalgo, as a short-term employee of Roman Stoneworks, has engaged in a social media campaign with false claims that are verifiably untrue. This individual was not terminated because of a meme posted on Facebook on Sunday, October 20. After the posting of that meme, he worked the following Monday, Tuesday and part of Wednesday. Mr. Hidalgo actually walked off the job on Wednesday, October 23 of his own volition, and over his manager’s objection. Roman Stoneworks and its officers desired to keep Mr. Hidalgo in its employment to perform his duties. He abandoned a job in progress and that was how his employment with Roman Stoneworks actually came to an end.

Unfortunately this individual, who was employed for less than 2 months, is now seeking to exploit the publicity that this false claim has created. He has started a Gofundme page to attempt to capitalize on his newfound exposure. Meanwhile, Roman Stoneworks and its owner and personnel have been subjected to significant monetary damage, as well as threats, profanity and harassment by phone and email. Due to the backlash from these false claims, my client’s webpage has had to be removed, and the individuals involved have been inundated with calls and emails.

If Mr. Hidalgo chose to tell the truth to all of the people who have now heard his false claims, then the matter may be able to be resolved amicably. Unfortunately this does not appear to be the route chosen by this individual. My clients have needlessly suffered based on these allegations.”

Hildalgo says that he didn’t want this to happen or to defame their name. He also doesn’t feel the need to delete the post because the damage is done. Going forward it might be smart for Hildalgo to have two facebook accounts, one for personal use and one for his work. Of course you could always just tell them you don’t have a Facebook to begin with.

It sounds like his boss was on pins and needles as it was and maybe there was something else going on. Whatever it was sure set us up for an interesting story.