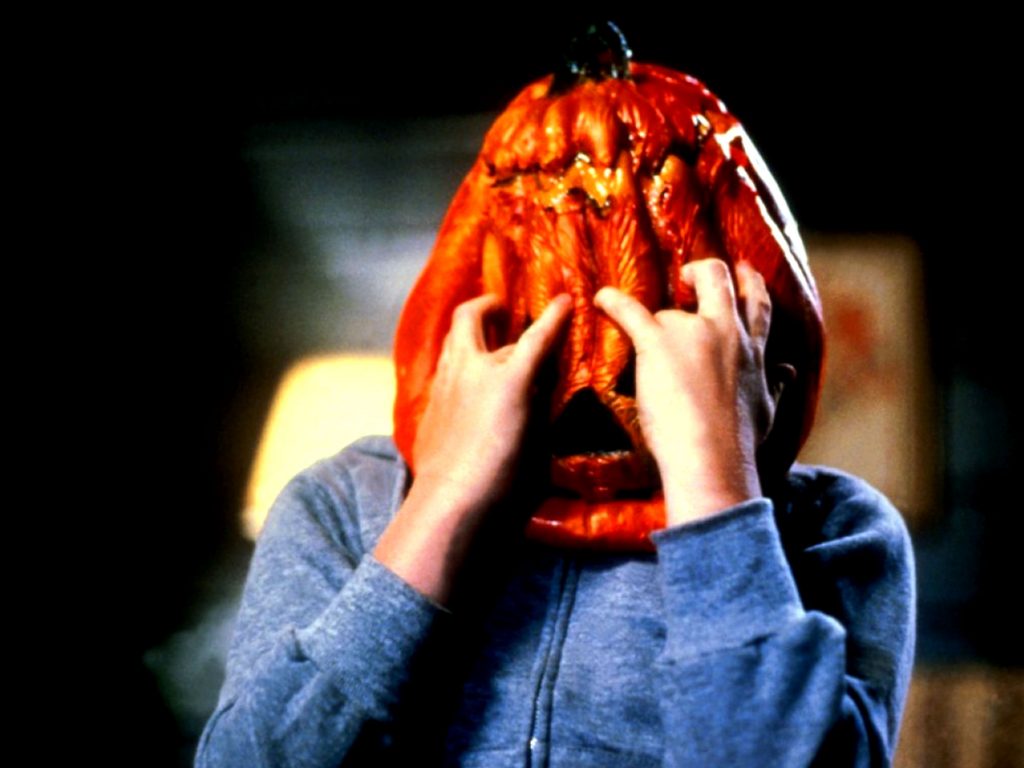 The One With The Masks: Halloween III

Sequels to movies and books are a pretty mixed bag of entertainment. For every full size Snickers there are dozens of Tootsie Rolls and Lemon Dum-Dums (who keeps handing these out on Halloween? For shame! Who’s trick-or-treating at your house, the ghost of Charlie Chaplin?) Some sequels are lovingly planned from the conception of the original, some are a blatant grab for cash and some are there just to make sure that no one on this planet, in this life or the next, will ever be ignorant of how Bruce Wayne’s parents died.

My original intention in this article was to point out the finer examples of horror movie sequels. Exorcist III, directed by William Peter Blatty, the author of the original novel and screen writer of the film, created an experience more chock-full of horror than a lakeside summer camp is full of machete wielding ghost-men. Scream 2 pokes facetious fun at the idea of the horror movie sequel, ups the body count and is entertaining in it’s own right, but I’m not writing about those movies. Something shiny caught my eye.

During my intense research into the subject I came across a sequel so bizarre that I felt it was important to share it with you, as you have likely passed it over or had it surgically extracted from your memory.

Members of the Nerdbot Society, I submit for your approval the tale of…

Halloween III: Season of the Witch.

Now, Jason/Freddy/Michael have all suffered some sea change in their eventual sequels and reboots. There’s been decent ones, bad ones and downright silly ones. Halloween III: Something about Masks, That Michael Myers Isn’t Even In, is usually passed over for the aforementioned reasons. In fact, I had never even taken it into consideration because my brother told me it was awful, and you have to believe what your older siblings say, even if it is about the zombie raccoon that lives in the pool light. Its Sibling Law. But I’m an adult now and he’s not the boss of me, and it would take a long drive for my brother to throw me in the pool for insolence.  So I decided to watch it.

After the events (profits) of the first two Halloweens, the second of which firmly implied that Michael was dead For Realsies this time (life must have been so simple in those days) the creative brains had to figure out how to continue the (big ole profits) of the Halloween franchise without doing something ridiculous, say, making him an immortal demon summoned by ancient Druids to eviscerate randy babysitters. That’s just silly. So they decided to make Halloween an anthology, kind of like VHS, but with worse production quality.

Not a terrible idea, on paper. That is, if that paper contained an engaging story and not a boozy middle-aged man’s submission to Playboy written on a series of dirty cocktail napkins and transcribed by a coked-up goat. The only tenuous connection to the actual Halloween movies is that infrequently an ad for the original movies is playing on the TV in the background. Not only is Michael Myers not in the movie, the movie adamantly states, he and the lore of the proceeding films are FAKE.

When our hero was introduced upon my viewing, I turned to my husband and said, “This can’t possibly be the hero of this movie, right?”  Wrong. So, so wrong. Dr. Daniel Challis is pushing fifty, mustachioed and looks like he lives on a diet of cold ham and cheese sandwiches dipped in cheap gin. He’s looks like the kind of guy that will circle the K-Mart parking lot for a half hour to get the closest spot. He makes Joe Don Baker of Mitchell and MST3K fame ooze with charisma and animal sexuality in comparison.

For further reference, a good portion of his IMDB credits list him as Chief, Detective or Captain so and so. This will come up later, because what is an integral ingredient in every slasher movie sequel? Sex. And buckle up dear reader, it only gets worse.

Not only does Dr. Challis resemble that weird relative who shows up every couple years and says sort of racist things at funerals, he’s also a deadbeat dad. I have no idea why this detail was necessary to include, because he has no redeeming arc. He buys his estranged children some generic drugstore masks, even more generic than the cursed drugstore masks that they have already wheedled out of their mother. Which makes sense, children start thinking about Halloween costumes in early February, not two days before Halloween and they definitely don’t want to be a dollar store “Star Trooper” with masks made out of hard plastic that’s been recycled from a Chernobyl junkyard. His children have been hypnotized though, by an evil jingle that is supposed to entice kids into wanting ugly cheap plastic things –which is basic marketing to kids- without the demonic corporation looking to recruit child soldiers… as far as we know. Do you know how many times I’ve read my nephew’s Christmas list in Target and said “This? He wants this? A pebble sized piece of plastic that’s going to get sucked up in the vacuum? For $29.99?” “He saw the commercial.” Is always the resigned reply.

I digress and will continue with our journey.

Our dashing hero is never really concerned with his (ex?) wife and children again. Not at all.  He’s a doctor, which makes him more prestigious and trustworthy than a weird CVS security guard that wants to walk you to your car. He notices something is strange about a recently deceased patient that gripped his lame skeleton mask through his death throes. When the patient’s young, nubile, and barely legal daughter shows up with questions, he is more than happy to go on a journey with her to seek answers.

I point out “barely-legal” because the movie points this out, gleefully, on several occasions. This is the fantasy of a man in the autumn of his life, not a horror movie.  A successful professional ditches the dowdy, nagging wife and the ungrateful kids, and goes on an adventure with a nineteen year old who willingly invites him into her bed to do things that… I feel uncomfortable about remembering, nevertheless committing to paper.  Let’s not even get into the Freudian nightmare that is the fact that her father, who just died,  is roughly the age of this upstanding gentleman who rented a motel room with one bed and half-heartedly suggested he sleep on the floor.  Let’s all participate in a group shudder and move on.

Oh yes, the masks! The movie and I both forgot about the masks! You see, the masks are injected with stones from Stonehenge because the authorities in England are too busy running around to the Benny Hill theme, whilst chasing saucy birds to actually police a national treasure and wonder of the world. Shamrock Masks/Evil Dudes, Inc., have been able to procure enough of these haunted/cursed rocks (without detection, because Park Rangers in Britain are apparently Austin Powers) to insert one into every mass-produced mask in America. Their plan? Mind control so that the kids will –well, that’s not super certain. Kill everyone? I’m no ninja, however I do go to the gym once a month, I’m pretty certain I could disarm an eight-year-old. Probably. The neighbors have asked me to stop challenging their eight-year-olds to fights, so I can’t qualify that statement.

I’m not going to spoil the ending, mostly because I got bored and started wondering whether or not my $2 Extra Bucks coupon at CVS had expired and all the wonderful things I could do with it. I could buy name brand and not feel guilty. Well, less guilty. You’re basically spending money on the packaging. What the hell does pearl extract even do to shampoo?

If you are looking to add a star to the constellation of Good-Bad Movies to watch with your friends this Halloween, Halloween III: Season of the Witch is it. Of course there are more notorious movies like, Troll 2 (lacking any Trolls), Birdemic: Shock and Terror! (lacking shock and terror but demonstrating a good possible use of all those wire hangers in your closet), Manos: Hands of Fate, and of course, the Twilight series, but what watching Halloween III adds, is that hardly anyone has. So give it a shot and be prepared to be chucked into the pool. Sibling Law.

It’s like bringing a platter of Del Taco chicken soft tacos to a potluck filled with all the staples: No one had any idea how exquisite it could be until they experienced it.