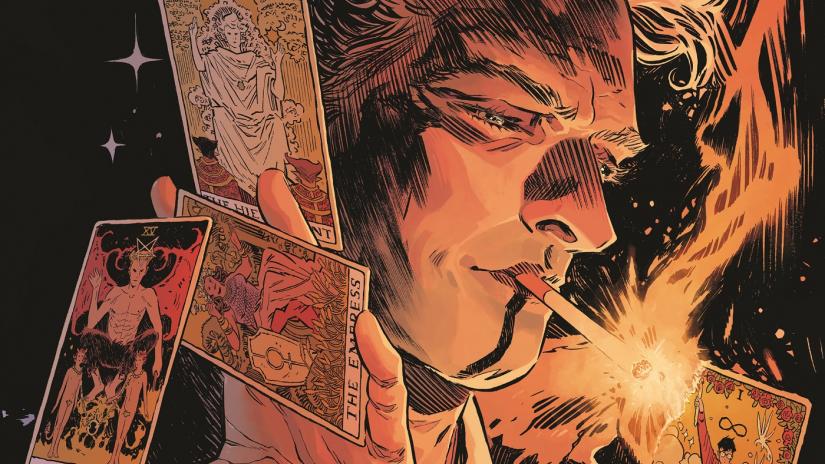 This Fall John Constantine Returns to the Sandman Universe

This fall, the dark and gritty magician-for-hire John Constantine is returning to the series that made him infamous. John Constantine, Hellblazer. Which will hit shelves in November, as a part of Neil Gaiman’s Sandman Universe imprint.

He’s now got a TV series, TV cameos, and a movie; making him more recognizable than ever before. However, John Constantine has his humble beginnings in the pages of Hellblazer. (Although his true first appearance was in an issue of Swamp Thing). His adventures through the urban hellscape of London became the soon non existent Vertigo Comics’ longest-running series. As it is closing out with its 300th issue in 2013.

“I was thrilled when I was told that John Constantine — the original, demon-haunted one who first showed up in Swamp Thing’s “American Gothic” story — is coming back to his murky and dangerous roots. More magic and more darkness and not a few gods and dreams are here for you to explore.”

The new series will be written by Simon Spurrier (The Dreaming, X-Men Legacy) with art by Aaron Campbell (Green Hornet, The Shadow).
It won’t be picking up from the current DCU John Constantine, but from a plot point of Gaiman’s 1990 miniseries The Books of Magic.

John Constantine finds himself haggard, bloody, and dying in an epic magical war—a battle that will soon consume the world. As he lies there, the vision of a young Tim Hunter stands above him, the naive youth seeing firsthand what his destiny holds. Horrified, Hunter flees back into the past, and Constantine is left behind to die.

Now, years later, Constantine reemerges, physically un-aged but with all of his memories intact—and yet the world has passed him by. Constantine must now fathom a new world torn apart by the same old political and social woes, while attempting to discover how he returned after all this time.

Here are the full covers for The Sandman Universe Presents Hellblazer #1 and John Constantine, Hellblazer #1:

Are you excited for more Constantine?