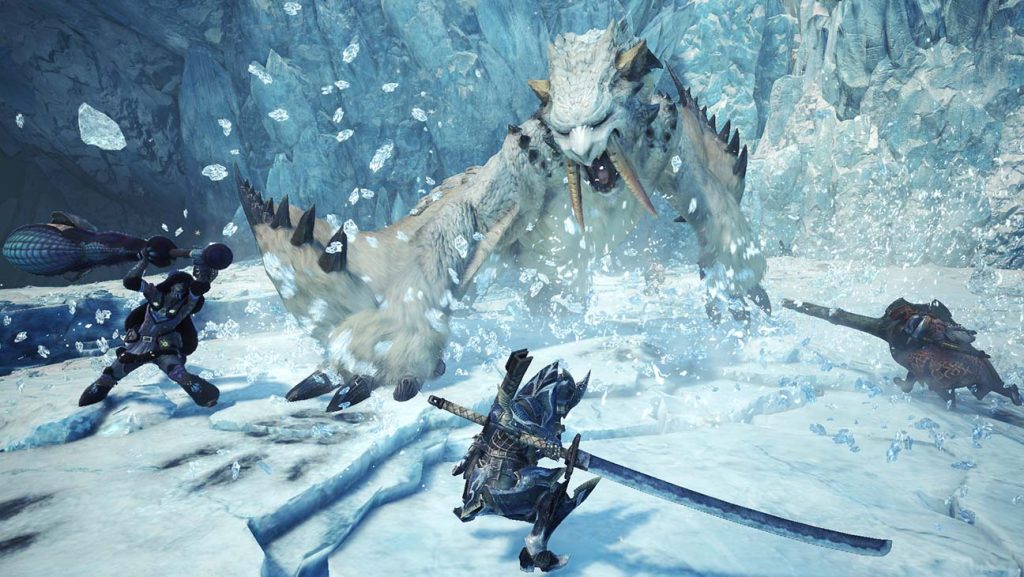 It’s time to sharpen your switch axe, strap on some armor and head out into the frozen tundra. Monster Hunter World: Iceborne launched on Friday and fans everywhere were ready to take on the new challenges this expansion promised. New monsters, armor, weapons, areas, quests and even a new difficulty mode are bringing new life and adventure to this fantastic game. I’ve spent the past few days exploring the Hoarfrost reach and here are a few things that have really stood out for me.

First and foremost, let’s talk about the heart and soul of the Monster Hunter franchise- the monsters themselves. Iceborne brings a new level of difficulty to its familiar residents through master mode. Returning creatures such as Barroth, Great Jagras, and Uragaan have a new sense of challenge with more HP, harder hitting attacks, and even some new move sets. Meanwhile, entirely new faces to the franchise such as Banbaro and Beotodus give hunters a chance to tangle with unfamiliar foes. Learning their attack patterns and weaknesses is incredibly fun and it feels very fulfilling to take them down. There is a true sense of realism to these beasts as you watch them interact with their environment and each other. For instance, Banbaro is a mostly docile herbivore that only attacks hunters when instigated. Once angry, he uses his large horns to uproot tree trunks and rocks to charge hunters.

Additionally, veteran Monster Hunter fans have gotten a true hit of nostalgia with the return of a multitude of fan favorite beasts. Creatures such as Nargacuga, Barioth, Zinogre, and Tigrex have all returned and they look gorgeous in World’s HD graphics. Each one has more detail than ever before and they fit seamlessly into World’s different environments. Additionally, each returning creature has received changes to their attacks and behavior patterns that make them more realistic and formidable. For instance, Barioth now launches attacks off of walls and utilizes his wings for airborne attacks which gives him more fluidity. So even though many of his attacks are the same from old encounters, they have new life as a result of the capabilities of World’s engine.

After monsters, you can’t talk about Monster Hunter without talking about weapons and armor. The new armor sets and weapons for the expansion are absolutely gorgeous. Each one has a power and balance that makes them fluid to wield and unique in their use. Additionally, new and more powerful decorations allow each hunter to customize their armor sets so they are prepared for a large variety of situations. Do you need something that allows you to consume items faster but also reduces your stamina depletion? Iceborne has a decoration for that and it’s the Gobbler/ Physique Jewel. My only complaint is that I wish some of the new armor sets had been a little more daring. I really wanted the Viper Tobi-Kadachi armor set to have a punk rock feel with dark tones and spikes to match his intimidating appearance. So I was a little disappointed to see it looks like regular Tobi-Kadachi’s armor but with Viper’s colors.

Finally, the last major thing I would like to talk about is the new environment. Hoarfrost Reach is beautiful in its attention to detail and realistic environment. From the shimmering flow of water on hilltops to the frozen crystal droplets on plant life, Cacpcom put a lot of love and attention into making this new environment believable. It’s fun to look at and explore. Plus, I really enjoy the new challenges of the environment. I have to remember that whenever I fight in deep snow I am going to be slowed down. Also, if I leave without warm drinks the harsh cold will slowly drain my stamina away ( at least until I get a Warming Jewel). The environment adds a layer of difficult that demands I give each encounter my full attention and plan ahead. It’s harsh and unforgiving, but it’s beautiful in its realism.

Over the last few days, Iceborne has stolen my heart with how fantastic this game is for both veterans and new fans of the series. It has something for everyone and I think the gameplay truly reflects all of the hard work Capcom has put into the series. So, if you haven’t taken a dive into Iceborne’s waters yet I can’t recommend it any higher. I know I will be playing this expansion for a very long time.