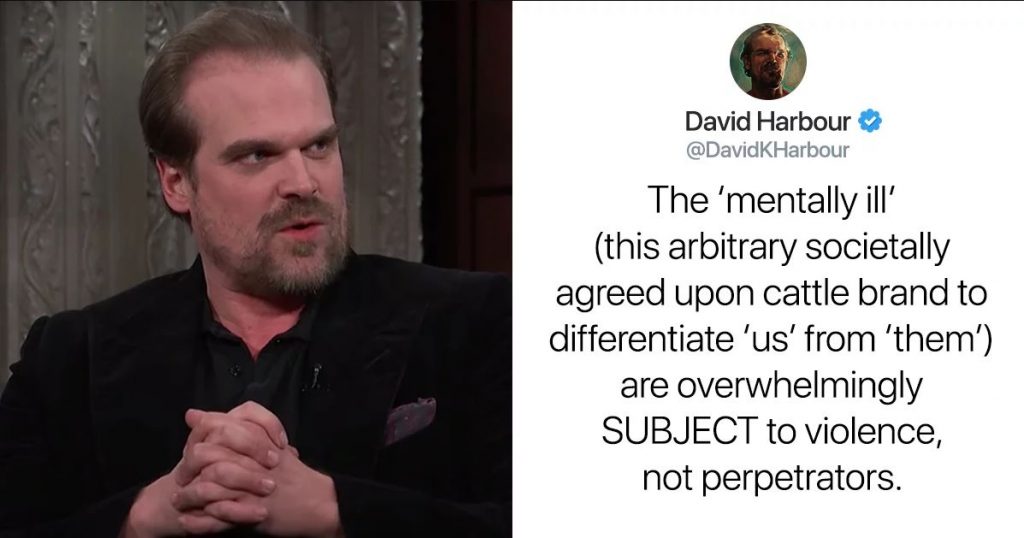 “Stranger Things” star David Harbour is very upset about using mental illness as a scapegoat for the increasing violence we are seeing in the news lately. He shares with us some personal information as well as his adamant thoughts on the issue.

The President Donald Trump declared that “mental illness and hatred pulls the trigger – not the gun” Monday following mass shootings in El Paso, Texas, and Dayton, Ohio. Defending gun use while completely throwing those with mental illness under the bus.

In response, Harbour openly shared his own experience with mental illness on a Twitter thread Thursday, saying, “I am a card carrying member.” Here are the words coming from his own mouth, well tweets.

“The ‘mentally ill’ (this arbitrary societally agreed upon cattle brand to differentiate ‘us’ from ‘them’ re: pain) are overwhelmingly SUBJECT to violence, not perpetrators. Those I’ve met in asylums are some of the kindest, lost people I’ve known.”

Harbour revealed to us in June 2018 that he was diagnosed with bipolar disorder at 25 after being committed to a psychiatric hospital by his parents following a manic episode. He now takes medication, adding, “I’ve been medicated bipolar for a long time.” This was incredibly vulnerable for him to do so and just goes to show how dedicated he is to erasing the stigma against mental illnesses.

More often it is the societally sanctioned sane that are violent. Being lost and confused and cracking up amidst the overwhelming hypocrisy and apathy of a society who’s very earth crumbles and decays by their own indifference seems to me a very considered response to daily life.

I tire of this archaic branding of a subset of the species altogether.

In times of cultural strife to focus rage, hatred and deep uncertainty on a weak, already ashamed and outcast group seems, at best cowardly, and at worst calculated evil.

What do you think about the surrounding controversy surrounding mental illness and violence being connected? Let us know in the comments!