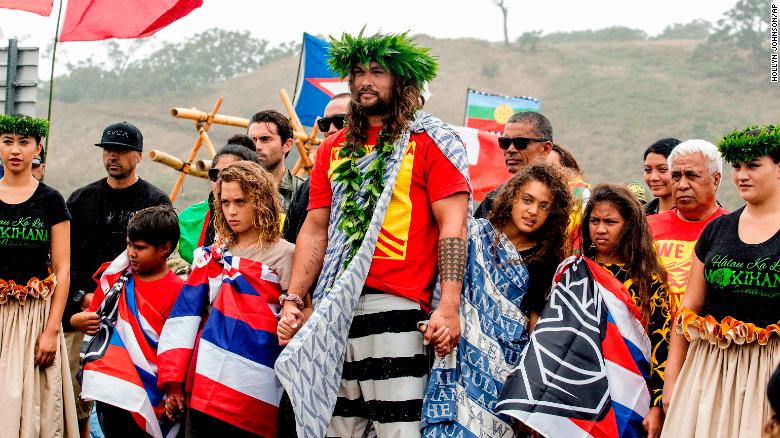 Actor Jason Momoa holds the hands of his children, Nakoa-Wolf Momoa, left, and Lola Momoa, right, as he is welcomed with a hula while visiting elders and Native Hawaiian protesters blocking the construction of a giant telescope on Hawaii's tallest mountain, at Mauna Kea Access Road on Wednesday, July 31, 2019, in Mauna Kea, Hawaii. (Hollyn Johnson/Hawaii Tribune-Herald via AP)
Celebrities

Although production for Aquaman 2 is not set until 2020, Jason Momoa has put his foot down when it comes to protesting for his native land. Momoa is absolutely irate over what has been happening in Hawaii and has been constantly updating his followers on the situation on social media.

The protest is against a major contruction project for the Thirty Meter Telescope (TMT) that plans on desecrating what Indigenous Hawaiians consider the most sacred site on Earth.

The protests have been entirely peaceful (with the aim to block the road to the construction site), but nonetheless, dozens of activists have been arrested.

Jason is clearly ready to halt his life against this $1.5 billion project even if that means not filming for Warner Bros. Depending how long the protests last may determine if we will get an Aquaman 2 on time or not.

What are your thoughts on this situation? Let us know in the comments!