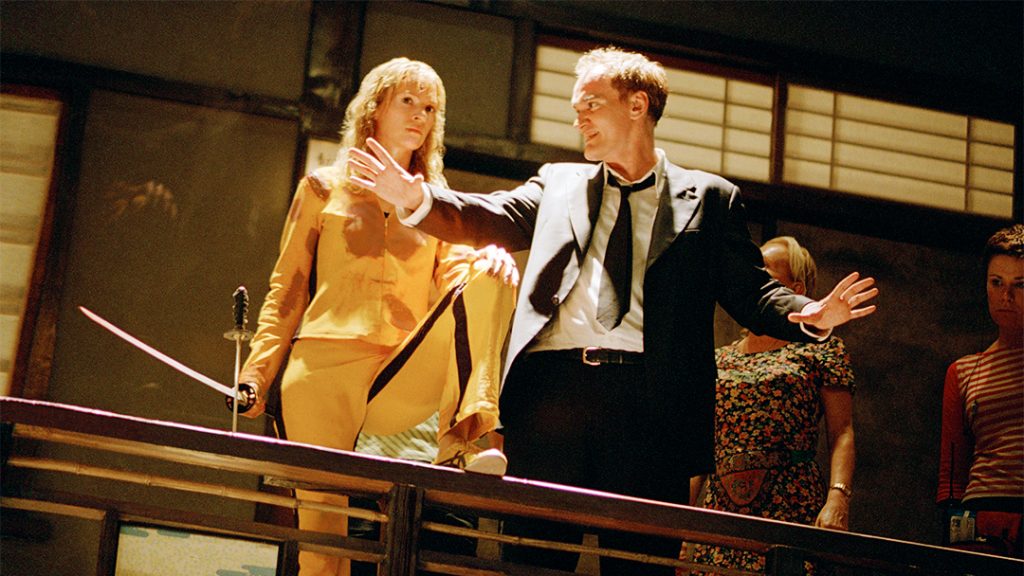 Now that the release of Once Upon A Time In Hollywood is imminent, Quentin Tarantino has had more time to talk about potential future projects. When talking to Josh Horowitz of the Happy, Sad, Confused podcast, Tarantino mentioned that one idea he has been coming back to is a new Kill Bill. While the project has been rumored for well over a decade, the interview reveals he has been taking the idea seriously.

In the podcast, he is asked what characters from his previous movies still stick in his mind. He mentioned the Bride from Kill Bill, along with Bill himself, Aldo Raine and Hans Landa from Inglorious Basterds. Tarantino elaborated further, saying that he had been in talks with Uma Thurman about reprising the role. He does make it clear that “I’m not sure if I’m gonna do it, but I have thought about it a little further.” While the director has avoided sequels (Kill Bill counts as one movie), Tarantino said that “if any of my movies were going to spring from my other movies, it would be a third Kill Bill.”

The idea of doing another entry in the series taking place much later has been something Tarantino has talked about for a long time. Even back when Kill Bill was still in theaters, he had been interested in telling a story that takes place 10 or 15 years later. In one version mentioned, it would have the daughter of Vivica Fox’s character, Vernita, grow up to take revenge on Beatrix for her death. Beatrix outright tells the daughter that she would be expecting her to come after her when she grows up. The story would add a moral wrinkle to the first movies where the protagonist would now be reframed as the villain. Since the movie would need to be 15 years later, Thurman is now the perfect age to reprise the role.

It would be a much welcome return to form for Thurman, whose career highlight was Kill Bill. Since 2004, Thurman has mostly stayed in the independent movie scene, avoided big budget fare save for some regrettable choices (My Super Ex-Girlfriend). She has also done some TV but nothing that has really been high profile, with her last show Chambers being a one season blip on Netflix. Thurman seemed to only look for projects that would allow her to be a parent and perform philanthropic work. She was in the spotlight in 2017 for bravely speaking out about the culture of sexual abuse that has existed in Hollywood, specifically guys like Harvey Weinstein. There was rumors floating about that her relationship was strained with Tarantino over the fact that she suffered permanent injuries while doing stunts for Kill Bill. Since then, they did reveal that the had patched things up and were interested in working together again.

Any news on what Tarantino plans to do next will be hotly debated since he long ago announced he only wanted to direct 10 feature films before retiring. Once Upon A Time In Hollywood counts as his ninth film, meaning that he only has one more movie left in him. Assuming that is true, it would be true to form for him to go out with a bang. What also complicates this is the fact that the Tarantino is still supposed to be working on a Star Trek film for Paramount. So either Quentin is going back on his 10 film plan or he doesn’t count Star Trek since that isn’t an original story. No matter the case, until a true announcement comes out, it will make any breadcrumbs he leaves the subject of endless debate. Until then, Once Upon A Time In Hollywood comes to wide release on July 25th, which will probably accelerate those rumors even more.