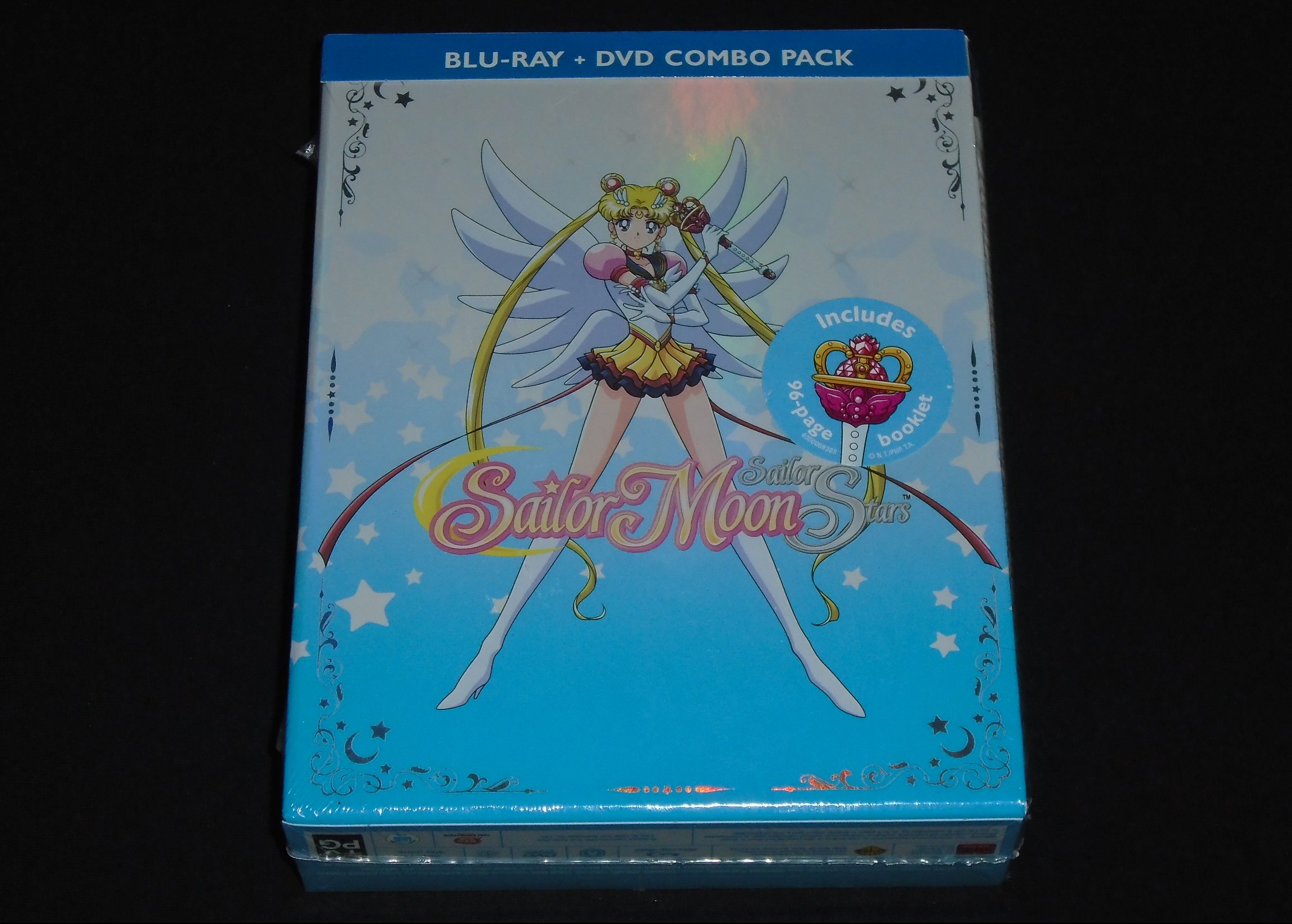 When I first opened the DVD for Sailor Moon Sailor Stars it was one of the most unbelievable moments in my life. Twenty years ago it was something no one thought would ever happen. Now today, we start our journey into the first ever official dub of Season Five.

“Sailor Moon and the Sailor Guardians are about to face their greatest challenge yet – high school! But as the girls take their next big step in life and Chibi-Usa prepares to return to the future, a mysterious force frees the evil Queen Nehelenia! While the struggle to contain her old enemy will be difficult, it may be Mamoru’s year of studying abroad that hurts Usagi the most. But there’s even more to take Usagi’s mind off of long-distance love with the arrival of the villainous Sailor Anima Mates and the heroic Sailor Star Lights! Who could be behind this new wave of evil? And why are the Star Lights resistant to working with Sailor Moon? Usagi has her hands full, but she’ll always make time to write a letter to beloved Mamo.”

There are a lot of things you can’t really grasp when you watch the subbed version of this. For instance the first episode has Galaxia narrating a portion of it. Hard to distinguish when you are reading the text and not yet used to Japanese dialect. The first episode here you are able to fully realize what is going on from the very beginning, giving you chills and keeping your attention glued to the animation.

The animation is also at its peak here. The lines are crisp and the movements are beautiful. The dub is fantastic and you really start to realize that this was Viz Media’s vision for the series all along. It was never just to “have” Sailor Moon, but to complete it in a meaningful way for the fans. They accomplish this fantastically in this, everyone who has been on board so far has stepped it up and you get a sense of seriousness in the subject matter. This is leading up to the final battle and the acting from the cast really signifies that.

Stephanie Sheh in particular has really grown into the role. No longer sounding like the child Usagi she now sounds like a conscientious guardian who holds the world’s fate on her shoulders. The same can be said for all of the others, but Robbie Daymond also brings this across quite well. With his acting in the first couple of episodes you can hear the internal struggle he has with himself.

When casting was announced for this I was admittedly already excited at the idea that Erica Harlacher was going to be part of the team. She has done amazing work in things like Violet Evergarden and I Want to Eat Your Pancreas. The other new castings were, Melissa Hutchison as Sailor Star Fighter, Sarah Williams as Sailor Star Healer and Carrie Keranen as Sailor Galaxia.

I mentioned before that in the first episode of this season that Galaxia narrates a bit of the plot while speaking to Nehelenia. Well her voice is hauntingly vicious as she wakes her. Taunting her to do her evil bidding without ever explicitly telling her to. Coaxing her. This is the first sign of what type of dangerous Galaxia is and Carrie Keranen proves to us that she was the perfect choice to voice her.

The others really bring their A game as well as we are thrown into the story that is the Sailor Star Lights!

The DVD itself is everything you would ask for. It continues the same look as the other sets and blends into them perfectly. The first release is a three disc set that holds 17 episodes total. That is the first 17 out of 33. The DVDs all have images of soldiers. Disc 1, Episodes 167 – 172 has the image of Eternal Sailor Moon. Disc 2(173-178) has an image of the Sailor Stars, and Disc 3(179-183 + extras) has Sailor Galaxia.

As far as the extras go there is an option to watch the trailers for the series, which are really just ads for the DVD/Bluray releases. It shows most the releases including the ones for Sailor Moon Crystal and one for Ranma 1/2.

While this DVD is beautiful and the images and picture are quite clear. I would urge you to buy the Bluray version if you are a die hard Sailor Moon fan. Especially because the Bluray comes with even more behind the scenes and extras than the DVDs can hold.

There is also what seems to be a typo in the synopsis on the back of the DVD itself or at least I think so. I have never heard Nehelenia called Nehaleenia before, and that is how they spell it on the case. It could be a mistake or perhaps Viz got that translation from somewhere officially. Either way though, this set is a must own. Especially if you want to know how this ends for Sailor Moon and her friends.

The Bluray is breathtaking. I suggest this if you are going to buy any version of it. Especially if you have the other sets already.

Included on the Bluray version are Interviews with the Cast and Crew, Intros and Outros, Trailers and an Art Gallery. The Art Gallery is really cool especially if you like to draw.

The booklet is beautiful too and has the story so far, episode synopsis, and Character breakdowns. The images for the characters are crisp and clean and they have a who’s who page for those new to this season.

There is also a beautifully designed alternate cover which if you choose to display showcases Galaxia on the spine of the set. The regular DVD set does not have an alternate cover so you are stuck with only one option.

Whether you are a fan or know a fan this is a must have. You can order each set through Amazon or Rightstufanime.com.

Do you already own it? Tell us in the comments what your favorite feature is!