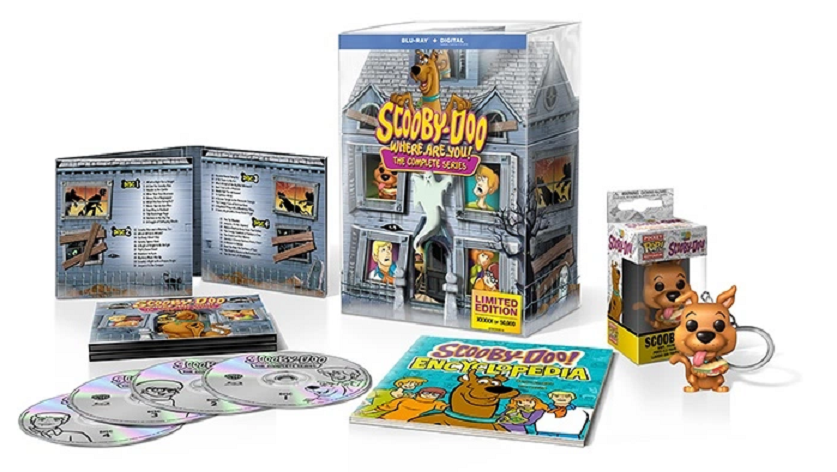 Of all the cartoons to come from Hanna Barbara, the most resilient has to be Scooby-Doo. Since their introduction in 1969, Scooby and the Mystery, Inc. gang have been featured in countless spin offs, remakes and adaptations, from live action to Lego. Now, to commemorate the 50th anniversary of Scooby Doo, Warner Brothers Home Entertainment has announced a deluxe blu ray set featuring all 41 original episodes of Scooby-Doo Where Are You? The set, as broken by bloody-disgusting, is due to come out on September 3rd, and will come in a box made to look like (what else?) a haunted house. It also comes with a mini encyclopedia as well as the obligatory Funko pop that everything has to have nowadays.

Along with a bunch of previously released material, the set will also come with new featurettes and documentaries that offer looks at the life and evolution of Scooby. A Scooby-Doo For Everyone charts how the character has been made and remade over the years and has interviews with how creators have played with the character. Another featurette tracks how Scooby has been made into toys, rides and attractions that are still being produced today. The documentary I am looking forward to the most is My Life With Scooby featuring a profile on the man…the myth…the legend…Frank. Welker. Welker is the only actor to have been a part of Scooby Doo from the very beginning, first as Fred and then, starting in 2002, as Scooby himself. Even if you don’t know the name, you are guaranteed to know his work. You practically can name any American cartoon and Welker has probably been on it in some form or another from Megatron to Abu in both the animated and live action Aladdin.

It is hard to understate how culturally important Scooby-Doo was for animation. The template of several friends and a talking animal going on adventures was ripped off countless times in American animation. You look at animation from the 1970s and there is a whole graveyard of cartoons that were just rip offs of Scooby Doo. Even the sitcom Happy Days had an animated show that featured the Fonz with a talking dog.

I think a big part of what keeps the series from being as beloved comes from how it tried to stay relevant. While the cartoon is remembered fondly, it can be easy to forget that the series most grievous sin, Scrappy-Doo, wasn’t introduced until 10 years later. It can create the impression that the show was more obnoxious than it initially was even if it does have that awful laugh track that many Hanna Barbara cartoons had. The show also requires a bit of context to really appreciate such as how Scooby Gang was modeled off the characters from The Many Loves of Dobie Gillis which absolutely no one remembers anymore. It makes having this box set important for anyone interested in animation history.