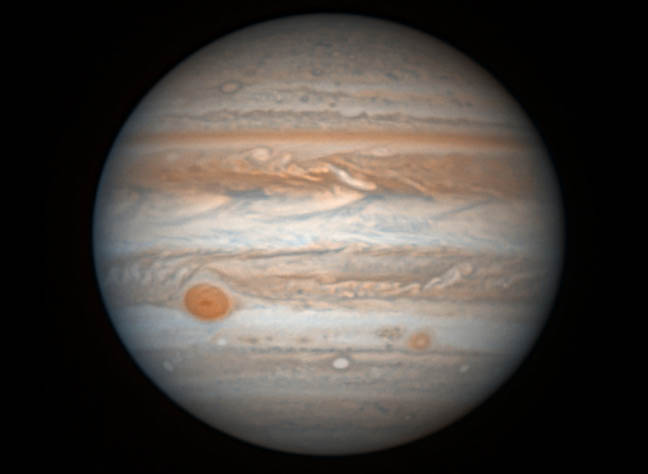 Look! Up in the Sky! It’s Jupiter at Opposition

If you are a space enthusiast or if you just like looking up at the night sky, June has some exciting viewing experiences for you.

During the month of June, the planet Jupiter will be at its “biggest and brightest” and will be visible with the naked eye throughout the night. NASA officials state that “The solar system’s largest planet is a brilliant jewel to the naked eye, but looks fantastic through binoculars or a small telescope, which will allow you to spot the four largest moons, and maybe even glimpse a hint of the banded clouds that encircle the planet.”

Viewing will be the best on June 10, when the sun, the Earth, and Jupiter are arranged in a straight line. Jupiter will be at opposition with the Earth between it and the sun. Jupiter should be the brightest object in the sky aside from the moon. Then on June 12, Jupiter will be at its closest to the Earth (398 million miles) for 2019.

Because of its southerliness and lowness in the sky, viewers in mid-northern latitudes might have their best views when the planet is at its highest in the middle of the night. Low altitude turbulence may also affect viewing in mid-northern latitudes. But otherwise, your geographical location should not impair your ability to see the planet (providing the sky is clear and there is no light pollution). Still, if your viewing gets rained out there are always the images from NASA’s Juno probe.

In other sky news, Mars and Mercury will appear close together immediately after sunset on June 17 and 18. They will be low in the Western horizon and the further North you are the lower they will be. Mercury will start the month of June below Mars but will climb as Mars descends until they reach their closest point. But from June 12 to the end of the month the two planets should be close enough to be seen in the same binocular field.

So if you get a chance, go check out the celestial splendor the month of June is putting on display for you.