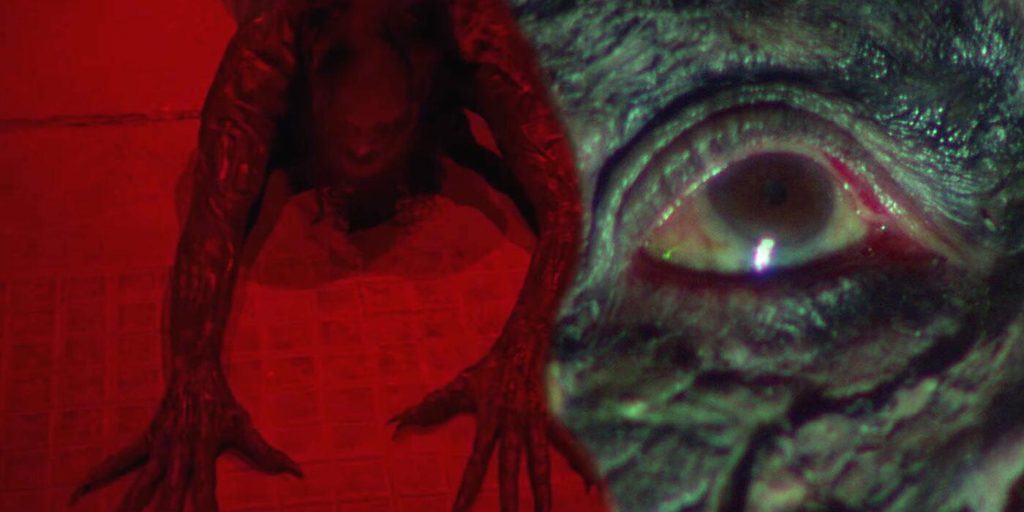 Suspiria: the Old, the New, and the What the Hell?

In 1977 Dario Argento presented us with the blood drenched ballerina fever dream that was Suspiria.

For real though, it all starts with Suzy Bannion, your typical American girl who’s come to Germany to study ballet at the prestigious Tanz Dance Academy, run by a mysterious directress and her underlings, the gentle Madam Blanc, and the scarily overbearing Miss Tanner. There’s also a hairy cook, skeletal butler, random creepy kid, and a blind pianist thrown in for good measure.

When Suzy arrives at the school, it’s nighttime and pouring rain(because of course it is) and whoever answers the intercom at the school warns her to leave at once. Confused and drenched she leaves, but not before noticing a girl running through the woods mouthing the words, “blue iris”. This is where shit gets weird. That girl is Patricia Hingle and she has just discovered a terrifying secret, so of course, she, along with her friend gets murdered by a random knife wielding hairy arm, shortly after seeking shelter at her friends apartment.

Back to Suzy, who (un)fortunately finally made it to the school the next day to begin lessons, only to pass out and start hemorrhaging during her first practice. Witchcraft?! Over the course of the rest of the film, strange events take place. Some that move the story forward, ie the strange injection, Suzy’s random tiredness and her talks with the late Patricia’s friend Sara, the blind pianist becoming food for his own service dog after an altercation with Miss Tanner, and some that seem to serve no purpose at all, ie maggots. Everything leading to a showdown between Suzy and the mysterious directress, Helena Markos.

The original Suspiria is fairly simple, plotwise, but also beautiful with its vibrant colors, bold lighting, and striking set designs. It’s like if Willy Wonka’s Chocolate Factory were the setting for a horror film. It works very well as a stand alone film, but can also be enjoyed alongside its two sequels, Inferno, and The Mother of Tears, both of which fill you in with all of the background information on the witches that you could want. You definitely don’t wind up feeling like you need more…

But you get it anyway…

In 2007 Italian director, producer, and screenwriter Luca Guadagnino presented Dario Argento with his plans to direct a Suspiria remake. Guadagnino then passed the project off to David Gordon Green, who then announced the remake to the world in 2008. It was set to star The Orphan’s Isabelle Fuhrman in the lead role as Susie Bannion (yes, they changed the spelling for the remake and I don’t know why). Within a few years, however, the project was dead and I could sleep peacefully again.

Fast forward to 2015. Re-enter: Luca Guadagnino with new plans for a Suspiria remake! Damn it all.

The remake takes place in 1977 Berlin, during what is known as the German Autumn, which was a series of terrorist events that occured during that time. Those terrorist events not only serve as a plot device to explain the whereabouts of Patricia, but they also tie into World War II, which, in this film, serves as a plot device regarding Patricia’s psychologist, who is played by Tilda Swinton (in one of her three roles of the movie).

Back to the main plot! Susie Bannion, played by Dakota Johnson (insert Fifty Shades joke here), has traveled to Berlin after the death of her Mennonite mother, to learn dance from the woman she idolizes, Madame Blanc, also played by Tilda Swinton. When Susie arrives at The Markos Dance Company for her audition to enroll, she’s made, by Miss Tanner and the other instructors, to feel like she shouldn’t even be allowed to audition and they even make her dance without music and keep time in her head. Regardless, her dance is powerful and her energy summons Madame Blanc to her. All of the instructors are suddenly very impressed with Susie and they offer her Patricia’s spot at the company, rent free.

This is where things veer far off track from the original.

The next day, Susie begins practicing the performance of Volk with the other girls. While she is preparing to dance, one of the other girls, Olga, who was just an extremely minor, and unpleasant character in the original, has a breakdown over Patricia’s disappearance. Madame Blanc attempts to comfort her by making Patricia out to be an extremist, claiming that she was probably responsible for a bombing that happened the night before. Olga refuses to believe it and runs out of rehearsal, ready to leave for good, screaming about witches. In one of the best scenes of the film, Olga becomes trapped in a rehearsal room surrounded by mirrors and finds her body being controlled by some outside force. As her body twists and contorts, her bones bend and snap, as Susie dances a powerful dance for Madame Blanc. Olga eventually winds up in a crumpled heap on the floor, as Susie becomes too weak to continue dancing.

The rest of the film is like an arthouse nightmare, its main two saving graces being the performance of Volk, and a cameo from the original Suzy Bannion, Jessica Harper, who plays the long lost wife of Patricia’s doctor, Doctor Josef Klemperer.

About the ending, all I have to say is, what the hell? By the way, there are some huge spoilers ahead, so beware. Susie eventually decides to willingly give up her body to be the next vessel for Mother Markos, and enters a chamber where all of her fellow dancers are in a trance, dancing, and the zombie-like Sara, Olga, and Patricia are all being disemboweled. This is where we finally get to see Mother Markos, in all her sluglike glory, who is also played by, you guessed it, Tilda Swinton. As Susie begins to surrender herself to Mother Markos, Madame Blanc, who at this point has become quite close with Susie, begins to feel that something is off and tries to stop her, but Markos kills Blanc before she can stop the ritual.

Mother Markos then tells Susie to think of her birth mother, her false mother, and to cast her away. As this is happening, a death like creature emerges from beneath Susie’s shroud, and Susie proclaims herself to be the true Mother Suspiriorum, revealing Markos to be a fraud. The death creature, in a red filtered, stop motion sequence, then kills everyone who voted against Madame Blanc in the vote that took place earlier in the film, including Markos herself, and Susie becomes the leader of the once divided and unruly coven, as well as head of the dance company.

This ending is where I take major issue. While it is somewhat beautiful, I preferred the idea of Suzy being an ordinary, innocent girl, who just happened to stumble into this weird world of witches and was able to take down the legendary Mother Suspiriorum despite all that. I think its too much of a stretch for her to have been the true Mother Suspiriorum the whole time. And they never explain how that happened, or why.

With all of that being said, Suspiria 2018 is alright as a reboot. I would certainly not call it a remake. It shares very few similarities with the original. It is a decent film, but don’t go into it expecting it to be a faithful remake of the original, because it’s not. It is, however, enjoyable, and a pretty good horror film.