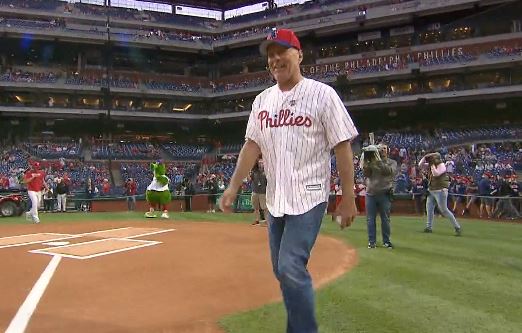 Bruce Willis may be unbreakable when he roams the streets of Philadelphia as a vigilante in M. Night Shyamalan’s film, but he was anything but impressive when he threw out the first pitch before the Philadelphia Phillies played the Milwaukee Brewers on May 15. Willis is a native of New Jersey and filmed the movies Unbreakable, Glass, and The Sixth Sense in Philadelphia.

Fans cheered the actor, a die-hard Phillies fan, as he walked out to the mound but they quickly turned on him when he bounced his pitch. Philadelphia may be the City of Brotherly Love, but its sports fans are notoriously tough.

The Philly Phanatic gave him a round of applause though, so that’s something.

One Twitter user named Kevin defended the star by saying the crowd wasn’t booing, they were calling “Bruuuuuce”