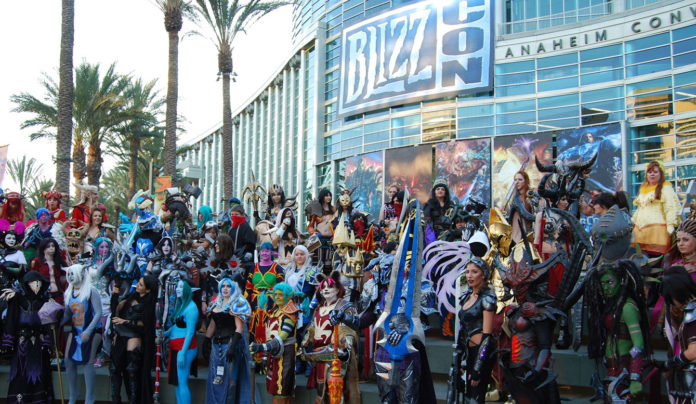 We love Cup Noodle, we're not afraid to say it. True, it's a far cry from the...
Read more

A giant asteroid is headed towards us this week.
Read more

Studio Ghibli is releasing a new movie this winter called "Aya and the Witch" This will be their first CG film and was worked on by the Miyazaki father son duo.
Read more

Racquel Keyes
Racquel Keyes is an artist, cosplayer and an animal lover, with a passion for everything nerdy. Racquel was born and raised in the sunny land of Southern California. You can usually find Racquel at home gaming, or creating a new fun makeup look. Racquel is a bubbly metalhead nerd with constantly changing hair colors.
Breaking News

OMG GUYS!! We have been all waiting patiently(not really) for the announcement of the infamous Blizzcon and finally it is here! Blizzcon has a date, and ticket sale dates!

If you are like me, this is the one thing you look forward to in the year…I mean mostly. Blizzard has been making us wait, surpassing the announcement date of April 9th from last year. BlizzCon ticket sales kick off Wednesday, May 4th, at 10 a.m. PDT. Another batch of tickets will go on sale Saturday, May 8, at 7 p.m. PDT. Tickets for the two-day event will cost $229. Pricing and availability for BlizzCon 2018’s Virtual Ticket were not announced. Blizzcon will be the first weekend of November, like prior years. It is set for November 1st and 2nd.

Three ticketing options will be available—the BlizzCon Pass, the BlizzCon Portal Pass, and the BlizzCon Benefit Dinner, the latter of which supports CHOC Children’s. Here’s what each gets you:

BlizzCon Pass – This is the core BlizzCon option, and what most attendees will want to go for. The BlizzCon Pass provides general-admission access to the show, along with access to Thursday’s new Pregame Festivities. You’ll also get this year’s in-game goodies (to be announced), along with your choice of BlizzCon 2019 Commemorative Collectible. $229

BlizzCon Portal Pass – The BlizzCon Portal Pass is your gateway to an array of extras to enhance your convention experience, including access to the Darkmoon Faire area on the eve of BlizzCon for a special “Night at the Faire.” It also comes with convenient perks such as preferred parking, separate registration and security lines, early entry to the show on Friday and Saturday, a dedicated lounge for taking a load off during BlizzCon, and more. $550

November 2019 marks the 25th anniversary of the Warcraft® universe, and So instead of doing a normal BlizzCon® Goody Bag as we has recieved the last few years, BlizzCon attendees will receive a distinctly Azerothian memento.

Everyone who attends Blizzcon this year will receive a BlizzCon 2019 Commemorative Collectible—one of two premium statues in the style of the Blizzard Legends series, celebrating a quarter century of Warcraft’s timeless central conflict. There is two choices: Orc Grunt, or Human Footman!

IMPORTANT! You’ll need to decide which statue you want at the time you purchase your tickets on May 4 or May 8. Quantities produced will be based on what is decided at ticketing.

Are you planning on going to Blizzcon this year? Let Nerdbot know in the comments.

We are proud to present Nerdbot’s Cosplay Spotlight where I interview cosplayers from around the world and share their work with you all. To begin the showcase, Nordballe from Denmark.
Read more

Anime Expo has announced plans for Anime Expo Lite, a smaller version of their annual event, to happen in 2020.
Related  President of Comic Con International Passes Away
Read more

If we were to ask you which state was most likely to go ahead with a large-scale convention amid the global pandemic, which of the American options would you have picked? Would it be Florida? Because [checks notes] it's Florida.
Read more

Check out this HILARIOUS video from the Virtual Pop Expo with Dan Fogler, Bernie Bregman, and "The Walking Dead"'s Ross Marquand and Cooper Andrews.
Read more

San Diego Comic Con Goes Virtual, Admission for All and No Lines Promised

San Diego Comic Con has announced Comic Con @ Home. No Lines, badges for all and pets are welcome
Read more

This news coming directly from the Wasteland Weekend website itself, this is no rumor!
Read more

We love Cup Noodle, we're not afraid to say it. True, it's a far cry from the...
Read more
Science

A giant asteroid is headed towards us this week.
Read more
Animation

Studio Ghibli is releasing a new movie this winter called "Aya and the Witch" This will be their first CG film and was worked on by the Miyazaki father son duo.
Read more
Movies

Following in the footsteps of other companies today, the Walt Disney Company pledges with a $5 million donation to non profits...
Read more

We are pleased to report that Niantic Labs, the company behind such popular games as Pokémon GO (which yes, we are still playing thankyouverymuch) and "Harry Potter" themed Wizards Unite is pledging to donate at least $5 million dollars to Black Lives Matter.
Read more

We guess we know how season 2 of Netflix's "Tiger King" saga is going to be about. An Oklahoma judge has ruled...
Read more

An artist created a life sized Falkor for a sick little boy. And it's the sweetest thing we have ever seen.
Read more

Yellowstone Had 288 Earthquakes in May, Should We be Worried?

Yellowstone for the month of May was hit with 288 earthquakes making people worry that it could signal we are closure to an eruption. Here is what we know.
Read more