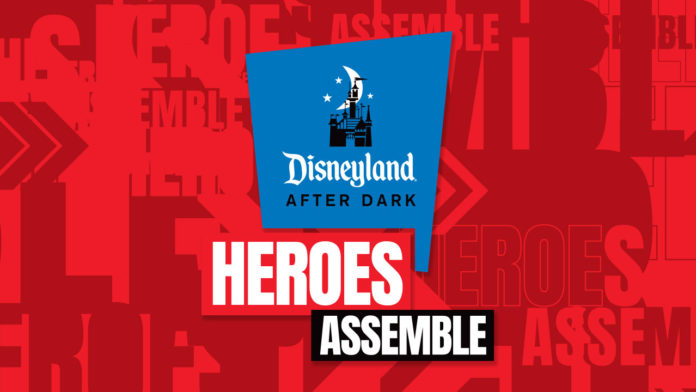 Disneyland is doing another ‘After Dark’ event after the success of the previous 4 iterations. If you’ve never been, think of it as a themed private party that Disneyland holds from 9pm-1am. Just for you…and like 9000 other people. So far the themes have been Vintage and Star Wars with Sweetheart nite and 90’s coming up soon. However, unlike previous events, this particular event and theme is catered to Disney California Adventure.

So what’s the next theme gonna be??? (Spoiler Alert)
It’s , HEROES NIGHT!

That’s right, it’s gonna be Disney’s version of Comic Con except more entitlement. But you might be asking yourself, what do those entitlements mean?! Well, let me run down some bullet points from their carefully crafted press release.

That’s basically the event in a nutshell. I can tell you right now, having been to one of these events, it’s actually quite fun! Plus the chance to see long lost Heroes return to the park is also quite exhilarating. Gives you the chance for this kind of photo op-

The special area photo ops are a cosplayers dream! Speaking of cosplayers…

This event has been deemed a costumed event meaning you can come dressed in your cosplay. However, be smart about this.

This is a special event, meaning that you’ll have to shell out extra money to be there. Tickets in the past have been running at $125 but the price for this particular event may vary since the price wasn’t mentioned anywhere on the press release. I would hate for you to have wasted a few hundred dollars after being ejected because you didn’t get to wear your Jim Logan made-screen accurate-but-actually-closer-to-comic-book-accuracy costume.
Be smarter, cosplayers. No masks.

Finally, the info for ticket sales! They will do this event on two different nights, in case you need more time to sew your costumes.

Are you planning on going to Disneyland After Dark Heroes Assemble? Tell us in the comments!

How to Recover Deleted Games on Windows 10

There is a new virus in China with the potential for a pandemic. Researchers are saying it's similar to swine flu that broke out in 2009.
Read more

Why oh why can't people understand the notion of wearing their damn masks? Its not an impact on your freedoms, its not...
Read more

The Spice Girls are going to go on tour in the US, Europe and Australia in 2021!
Read more

Did this crafty man need to make a tank that shoots potatoes and still cuts grass? No. But is it awesome? Heck yes!
Read more

Lisa Joy and Jonathan Nolan, the married writing duo behind HBO's "Westworld" have announced their brand-new project for Amazon, and fans of the Wasteland are gonna be excited. Joy and Nolan are currently developing a television series based on the highly popular video game franchise "Fallout."
Read more

These Teabags Look Like Real Sea Creatures While Steeping!

OceanTeabags has a bunch of different animal designs, but these sea creature ones have got to be our favorite for steeping in a cuppa!
Read more