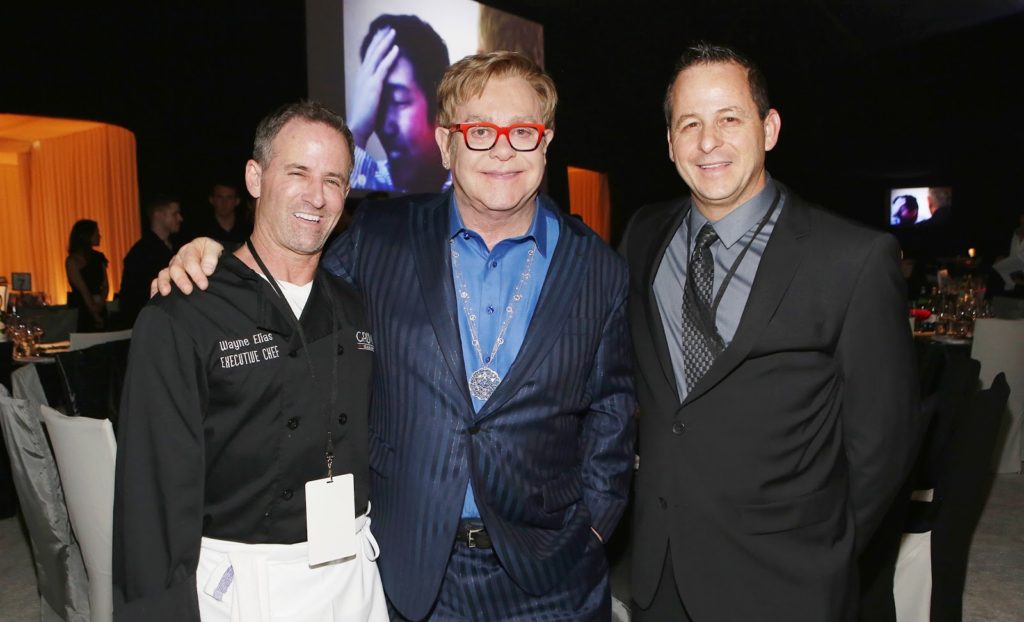 This one-thousand-meal massive undertaking will be seamlessly executed in three hours by a team of over 150 Crumble Catering staffers tasked with serving Hollywood’s biggest A-listers.

When it comes to a mouth-watering and inspiring cuisine, Chef Wayne and his business partner of 28 years Chris Diamond, co-owners of Crumble Catering and the Los Feliz restaurant Rockwell: Table & Stage, are truly Hollywood’s “go-to” team. Diamond remarked, “We love creating a magical experience for the Foundation guests – as it is not only a celebratory night for Hollywood, but a vital cause-driven night for raising funds!”

The planning for this year’s party literally commences at the conclusion of the previous year. Chef Wayne works hand-in-hand with Diamond and his team of sous-chefs and the Foundation to create a one-of-a-kind-menu for the festive gathering of VIPs and donors.

As in the past, this sumptuous five-course dinner will be served on-site with mammoth digital screens broadcasting the Oscar telecast live, while fund-raising activities happen during commercial-breaks. West Hollywood Park is literally transformed into fantasy city-within-a-city, with a sprawling array of custom-built connecting pavilions featuring sparkling custom one-night-only décor, state of the art lighting, projection, and displays. The army of 150 servers and bartenders are supplemented by a kitchen staff of 70 to make the split-second timing and execution for the night simply flawless.

Elias commented, “We are excited to lead the way this year with a menu that will delight the senses and please the palates of this discerning and generous group of patrons.” Adding, “It truly is one of the most exciting moments for my team and always a night to remember, knowing that so many individuals are benefiting around the globe.”

Since 1992, the Elton John AIDS Foundation has raised over $400 million for people affected by the epidemic, helping prevent infections, provide treatment and services, and motivate governments to end AIDS.

Crumble Catering has catered hundreds of A-list events from Harry Potter to Criminal Minds Beyond Borders, to Creed, Live By Night; along with cast and crew screenings for Argo, Coat of Many Colors, and Cloud Atlas. Most recently Crumble Catering has provided services to major events and premieres for Blade Runner 2049, CHIPs, Jumanji, Paddington 2, Spider-Man Homecoming, Steven Tyler Grammy Viewing Party for Janie’s Fund, John Varvatos, Maxfields, and more! Whether it’s an elegant dinner for 10, or a major corporate party for 5,000, Crumble Catering can make it effortless and fun. For more information, visit: CrumbleCatering.com

ABOUT THE ELTON JOHN AIDS FOUNDATION

At EJAF, we believe AIDS can be beaten. We act on that belief by raising funds for evidence-based programs and policies, and also by speaking out with honesty and compassion about the realities of people’s lives. Sir Elton John created EJAF 27 years ago. Over the last quarter century, through hard work and with the help of our network of kind and generous friends and supporters, the foundation has raised more than $400 million globally to combat stigma, prevent infections, provide treatment and services, and motivate governments to end AIDS. This work has reached millions of people in Africa, Asia, Europe and across the United States. Join us in speaking out, taking action, and contributing to our efforts to achieve a world without AIDS. For more information, please visit www.ejaf.org.