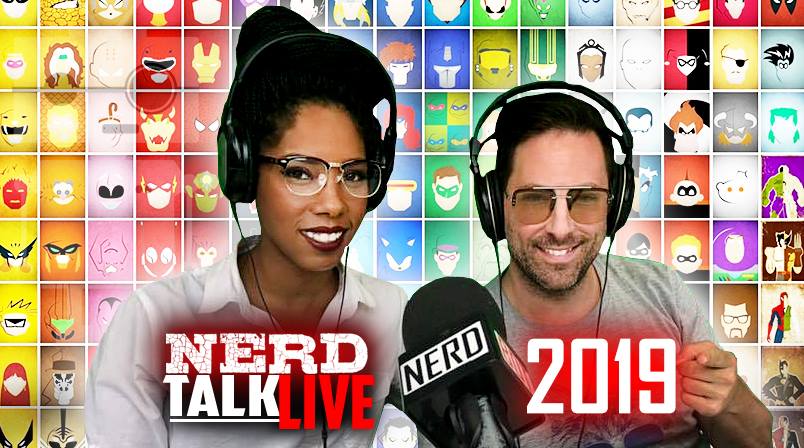 Nerd Talk Live is coming back to Nerdbot Media for another great and Nerdy year! Hosted by the Bernie Bregman and Krystina Arielle Tigner, they will be covering all manner of nerdy and pop culture topics!

Considered Nerdbot’s main live news show, it is of the most popular among it’s broadcasting schedule. Not just limited to Nerd and Pop culture news, Bernie and Krystina tackle any multitude of subjects that face our community, including, but not limited to negative nerd culture, racism, sexism and bullying.

Bernie Bregman, known as The Geek Gatsby, is very well known in the nerd and comic convention community as a top tier event organizer, host and entertainer.

“I’m really happy to be back in 2019 because the show has been a great way to connect with our community, to inform as well as entertain, and to tackle tough topics. These are all things that are important in today’s world and I’m excited to engage people in all forms. It’s a true pleasure to host the show with Krystina, someone I admire and have a connection with. She enriches my worldview as well as the show and I think the audience benefits from her perspective. She’s also just a dynamo of energy and I feed off that. ” – Bregman

Krystina Arielle Tigner is an incredible talent in the nerd community. She is currently part of the cast on the Dungeons & Dragons show ‘Sirens Of The Realm’ and ‘Ironkeep Chronicles’.

“Have you missed us? We’ve missed you! Welcome to the 2019 season of Nerd Talk Live! My hope is that we continue to entertain you while also keeping it fun and honest. We will continue to talk all things pop culture with lots of surprises along the way. Stay tuned!” – Kystina

Catch the last episode of 2018 below!

The first anticipated guest is scheduled for January 28th and it is none other than Matt Mercer! World renowned Dungeon Master and Voice Over Actor, Mercer is most well known for his work in Anime, Cartoons and Video games. He has voiced just about everything and you definitely know him from somewhere. His IMDB lists everything from voicing the narration of Hearthstone’s Kobold’s and Catacombs Trailer to Bigfoot on the New Looney Tunes Show. He has been in many DC Animated films and Video Games as well as Anime like JoJo’s Bizzare Adventure (Jotaro Kujo), Fairy Tail (Silver Fullbuster), and a ton more!

Will you be tuning in tonight? Tell us in the comments!