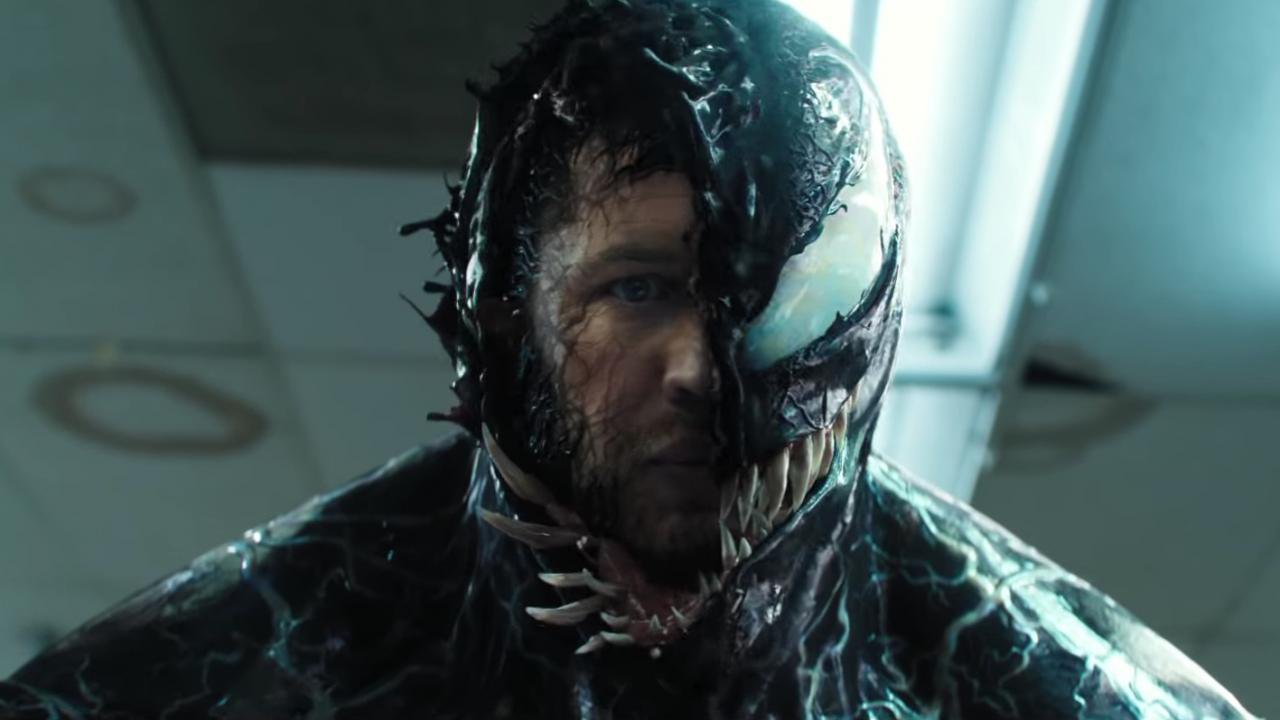 This weekend, Sony Pictures reintroduced moviegoers to everyone’s favorite lethal protector: Venom! Last time the ebony alien graced the screen, he was disappointingly crammed into the third act of the already overstuffed Spider-Man 3. Now, with Tom Hardy taking on the role, were they able to surpass their failure and bring fans the Venom they always wanted? Well…for the most part.

The film follows investigative reporter Eddie Brock, unemployed and hard on his luck after pushing the boundaries of a fluff piece with unscrupulous CEO Carlton Drake. After a whistleblower begs Brock for help, he breaks into Drake’s lab and discovers his horrific experiments: parasitic alien lifeforms called symbiotes, one of which merges with him. Now on the run from Drake’s men, Brock must use the powers of his violent new ally to survive. Obviously, this movie has a hand tied behind it’s back going in. It has zero connection to Spider-Man. For a character like Venom, a supervillain whose comic book origins and motivations are tied very directly to Spider-Man and his history, becoming a standalone hero could have been disastrous. Thankfully, the filmmakers have avoided that disaster, but not without making some changes.

First of all, Eddie Brock is far less of a scumbag than his comic book counterpart. Tom Hardy makes Venom’s eventual host endearingly schlubby, a nice guy with strong convictions that lead him to some poor personal choices. He’s clearly the cast member trying the hardest, compared to Riz Ahmed’s uninspired villain Carlton Drake and Michelle Williams’ zero-chemistry female lead. That said, Hardy is also given the most to work with in the movie thanks to his dynamic with the symbiote (also played by Tom Hardy, but doing a Keith David impression).

Unlike the comics, where Venom is pretty much a single entity that speaks in first-person plural for the creep factor, this take makes him into two distinct characters. It’s less like a merger of two organisms than it is Tom Hardy having to adjust to a new, goopy roommate in his brain. However, it’s the banter between the exasperated Eddie Brock and his surprisingly sassy symbiote that help elevate Venom from “good Spider-Man villain” to “main protagonist.” Diehard Venom fans may not be happy about the change, but it was a necessary one to make this movie work.

Effects-wise, though, Venom looks right…but doesn’t always look great. Yes, he has the oily black skin and the teeth and the tongue. But there’s something about how cartoonishly big and muscular he is that rubs me the wrong way. It also doesn’t help that the stilted animation makes him move like a monster from a PS2 game. It’s an unfortunate distraction in every action scene.

Riot, Venom’s former comrade and third act nemesis, doesn’t fare much better. I don’t know why they chose Riot of all characters to fight Venom in the climax. He looks exactly like Venom except his grin is a bit wider and he has dark grey skin instead of black. I spent the whole fight scene trying to figure out which one was which. The two literally merge together at one point and I didn’t notice until they split apart again.

In speaking of splitting, the whole movie has a disconnect between its first and second halves, both in terms of tone and pace. The first half expertly takes its time, building up characters and mysteries. There’s a very strong sense of horror and intrigue, right up until Eddie merges with Venom. Suddenly the movie goes a mile a minute, hurdling itself through action sequences in a mad dash for the climax while dropping a lot of its dramatic weight. For example, Venom keeps biting people’s heads off, but nobody really seems to mind too much. They even joke about it.

Honestly, though…I don’t mind too much, either. Fans have been clamoring for a hardcore, horror-themed Venom adaptation since Sony announced the project way back in 2007, but that’s not really what Venom is. Venom is one of the favorite sons of ‘90s comic book excess. He’s the guy quipping about eating brains while his tongue dances around like a snake, and this movie delivers. Sure, it can feel a bit like a gritty remake of 1997’s Star Kid. But if you can let go of what you think a Venom movie COULD be, you’ll enjoy this one for what it is: a decent action flick, and a better one than you should expect for an October release.

What did you think of Venom? Let us know in the comments!