Castlevania Symphony of the Night: Celebrating 21 Years of Fright

The force will be strong with your little padowan if you get these for their room!
Read more

We all need a little something to make us laugh and smile right now, right? And what...
Read more

This Batman Shelf is Perfect for Any Kids Room

What better way to decorate a nursery than with your favorite superheroes?
Read more

This is a “Nerd Voices” contributing piece from Nerdbot reader Chris McAuley. You can find him on his video game and comic book blog or Facebook!

Playing through Castlevania: Symphony of the Night I am struck by how the visuals have stood the test of time.  It was indeed a clever move by Konami to shrug off any pressure that they felt to jump on board the 3D train for this iteration of Castlevania.  Indeed the 32 bit era was a time for transition in the game industry.  The Sony PlayStation introduced widespread use of 3D graphics, leaving many to disregard 2D as inferior, dated and useless.  The era also marked a shift away from games being able to be beaten in a single sitting which typified many leading titles of the 8 bit and 16 bit era to longer games requiring multiple save game states to beat.

In this respect Konami responded, not with bleeding age 3D effects (which would have looked dated by now – and affected the longevity and affection that this title has garnered over the past two decades) to create an action/role playing hybrid – a style of game in the series which has been known as Metroidvania, due to it’s similarity with the Metroid style exploration seen on the NES and Super Nintendo eras preceding it.

Now at this point it has to be said, Castlevania was no stranger to 2D role playing elements, Simon’s Quest – the second game in the Castlevania franchise, released in 1989 brought this element into the series – albeit in a very flawed fashion with abstract puzzles and an unclear way to progress through the game. 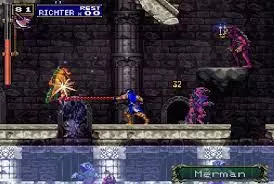 The game begins just before the climatic battle between Richter Belmont and Dracula shown in Dracula X for the PC Engine.  You ascend the iconic staircase and confront the vampiric nobleman who is seated on his throne holding a champagne glass containing the life fluid from a villager, he begins a contemptuous speech  – declaring famously “What is a man” – at the end of this dialogue, he flings his glass to the floor, spreading his cape as it shatters on the floor.  The reenacted and fully playable battle between Richter and Dracula is not difficult and there’s no way to loose this initial encounter as Maria (a playable character met in the Dracula X instalment) will regenerate your health if you ‘die’ during it.

After defeating the Count – the story moves forward five years, as a character last seen in Castlevania 3: Dracula’s curse on the NES – Dracula’s own son, Alucard awakens from a self imposed slumber, just as Dracula’s castle appears once again.  Richter has mysteriously disappeared and Alucard grabs his sword and sets off on a path to confront whichever force has brought the crumbling Citadel back after it’s apparent destruction. 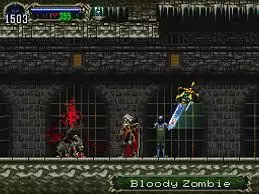 The controls of this game are vastly smoother than the previous iteration, with Alucard moving quickly and with elegance.  Two attack buttons are used for his left and right handed weapons, or for different items or shields as equipped by the player.  In addition to the standard double-jump Alucard can transform into various forms to help him defeat various enemies and explore the castle fully.  The Bat – allowing you to fly, The Wolf – allowing you to swim and run fast and The Mist- allowing you to squeeze through tiny gaps in the walls.

This game is also a bit of a loot gatherers dream, there’s an amazing amount of weapons to collect which affect your personal statistics in different ways, this propels you onwards in order to continually max out your stats, the other RPG element added to this title is the fact that after each enemy you defeat you are awarded experience points and eventually you level up.

There are over twenty bosses to find and defeat in Symphony of the Night, some use the Playstation’s power very effectively and stretch over over screen. Legion for example is a mass of featureless human bodies amassed together in the shape of a giant globe.  The Lord of the flies himself Beelzebub is a giant rotting corpse impaled on meat hooks. 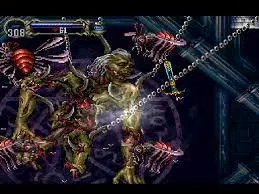 Alucard’s animation remains the centerpiece of the game, but the games backgrounds have fantastic detail, muting the bright colours of previous iterations and bringing a truly gothic feel, the backgrounds do feature some sparing 3D effects – flowing clouds in the belfry and the beauty of the stained glass windows in the chapel.  This brings a unique feel to each area, more subtle are the strange elements of the castle which go towards making it feel…alive.  One example of this is the weather effects in the outer area, they change periodically.  The variety of enemies and detailed animation add to the experience, whereas in past iterations they may have only been 4 or 5 different standard enemy types, in Symphony there are over a hundred.

Related  Nintendo Plans On Giving The Switch An Early Facelift

Please pick this up in one of it’s various iterations if you haven’t played it yet.  It is available from XBOX Arcade and the Playstation store and is a hidden extra in The Dracula X Chronicles on the PSP.

It seems that the Hong Kong PlayStation Store had a huge slip-up recently. Accidentally, a listing for "Far Cry 6" appeared on...
Read more

[Rumor] Nintendo 64 “Turok” is Being Remastered for the PS4

PS4 trophies were leaked online. Get ready for Turok to drop on the PS4!
Read more

Less than a month after the reveal of "Crash Bandicoot 4: It's About Time," we have yet another Crash title to look...
Read more

Wolcen: Seven Important Recommendations for Beginners in this Game

An open world with limitless possibility. Here are some good tips on playing the game if you are new.
Read more

Although there are only four available, their connections, alleys, and shortcuts make for endless opportunities. In this guide, we’ll take a look at all four of the maps: SPLIT, HAVEN, and BIND.
Read more

“God of War: B is for Boy” is a (Mostly) Kid-Friendly ABC Storybook

The Top 3 Most Played Mobile Games During Lockdown

Want to know what the top three mobile games played during lockdown are? Can you guess what they might be?
Read more

The force will be strong with your little padowan if you get these for their room!
Read more
Streaming

We all need a little something to make us laugh and smile right now, right? And what better way to accomplish that...
Read more
Nerd Culture

This Batman Shelf is Perfect for Any Kids Room

What better way to decorate a nursery than with your favorite superheroes?
Read more
Movies

A Piece of “Star Wars” History Courtesy of the Dykstra Family

Ok so, imagine your dad is part of science fiction film royalty, and you just HAPPEN to find his copy of a...
Read more
Television

Move over Amazon because a new competitor is about to enter the subscription service ring! Later this month, Walmart will be unveiling...
Read more

Currently a pilot script is being worked out for the series.
Read more

Ready for an overdose of cuteness? Check out the animals in these cute noodle cup beds!
Read more

Baby Owls Sleep Facedown Because Their Heads are Too Heavy

Baby owls are adorable anyway but now we know they sleep facing down because their heads are too heavy and it's the cutest fact yet.
Read more

Jason Momoa, star of the blockbuster DCEU film 'Aquaman," has recently become the victim of a smear attempt this week over an...
Read more

These Star Wars Shelves Will Take Your Kids Room to Another...