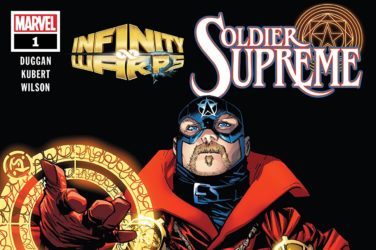 Marvel comics has recently announced that it would be doing a mashup of characters in a few upcoming series in their Infinity War run of comics. I recently got a look at one of these mashups with the release of Marvel’s Soldier Supreme.

It is an easy guess as to who the mashup characters are within the title. In Soldier Supreme, we get a combination of Doctor Strange and Captain America. This creates one of my favorite versions of a comic character to date with a magic wielding super soldier for the United States military during World War 2; Stephen Rogers aka Soldier Supreme.

Stephen Rogers is gifted with his powers and physique by Doctor Erskine, a female in this iteration. She uses magic to concoct a formula that she injects in Stephen, granting him with a larger physique and magical powers used to serve his country. Soldier Supreme still has his shield, of course, but this time it comes from magic as he must cast a spell to summon it. The premise of its use stays true to Captain America. Overall, I was a huge fan of the first issue of Soldier Supreme. It was fun seeing the combination of two of my favorite Marvel characters become one and creating an interesting character to say the least. The comic was enjoyable and easy to follow. It kept me engaged throughout the whole issue. The fact that we got mashups of other famous Marvel characters also spiked my interest. The issue kept me anticipating the next page, even the next panel. The artwork by Albert Kubert is absolutely amazing and the coloring of Matthew Wilson gave the comic so much depth and emotion. The writer, Gerry Duggan, knew exactly how to bring this mashup to life and make it work. The story was beyond interesting to read.

I would definitely give this comic a read if I was an avid comic fan or even just a fan jumping into the world of comic books. The series will be limited, of course, with only two issues, but it won’t be the only Marvel comic mashup we get this year. Titles such as, Iron Hammer (Iron Man and Thor) or Ghost Panther (Ghost Rider and Black Panther) will soon make an appearance. These may seem like strange combinations, but after reading Soldier Supreme, I am confident in Marvel on making these character combinations work.

What do you think of these mashup of characters? What two characters in the Marvel Universe would you combine to make an epic hero? Let us know in the comments below.