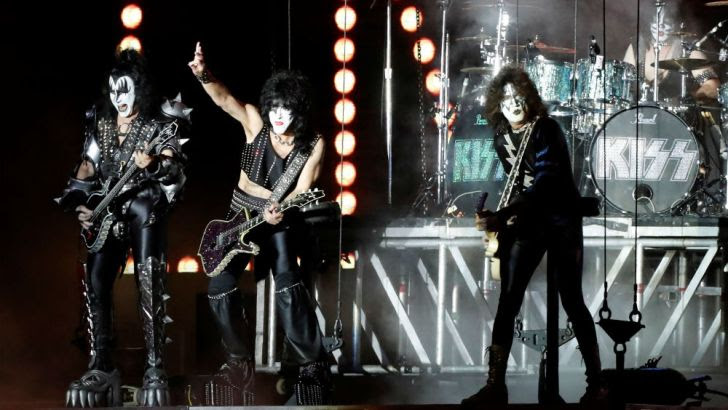 KISS Announces Farewell World Tour Will Be: ‘Our Biggest Show Yet’

Variety reports that KISS announced tonight their “End of the Road World Tour” — which, obviously enough, will be their last. While the group stopped short of announcing dates, the title suggests the tour will be on the scale of Elton John’s three-year farewell campaign, which launched earlier this month.

“All that we have built and all that we have conquered over the past four decades could never have happened without the millions of people worldwide who’ve filled clubs, arenas and stadiums over those years,” the band said in a statement. “This will be the ultimate celebration for those who’ve seen us and a last chance for those who haven’t. KISS Army, we’re saying goodbye on our final tour with our biggest show yet and we’ll go out the same way we came in… Unapologetic and unstoppable.”

The group made the announcement on NBC’s “America’s Got Talent,” and also performed their 1976 hit “Detroit Rock City.”

Fans will remember that Kiss’ original lineup did a farewell tour nearly 20 years ago, which was the last to feature drummer Peter Criss. Guitarist Ace Frehley has since left the band as well, leaving Paul Stanley and Gene Simmons — always the band’s leaders — with drummer Eric Singer and guitarist Tommy Thayer, all of whom perform in original Kiss makeup.

This isn’t the first time KISS announced their final tour. If memory serves me correct, they made claims they were going to stop after their 90s music? Or was it after Psycho Circus when all four original members reunited, threw the makeup back on, and proved they were still able to rock and roll all night, shout it out loud, and be our beloved creatures of the night because ALL HELL’S BREAKING LOOSE, DAMN IT!

Kiss made their reputation as a live act in the mid-1970s with the most over-the-top presentation rock concerts had seen to date, intensifying and exaggerating the fantasy and horror-movie elements Alice Cooper had introduced a few years earlier. Everything about Kiss was larger than life — wild makeup and costumes, fireworks, hydraulic platforms, the blood-spitting demon (Simmons) and perhaps most of all the marketing campaigns — which led many in the rock intelligensia to write off their music. But all fans know that be it their classic 70s rock, that one disco album, (and step off, I liked Music From The Elder!) their 80s hair metal, or their 90s….yeah…KISS is most certainly the hottest band in the world. And if you don’t agree, guess what? That’s all right.